There's been no threat of lightning during the harvest this year—not yet, anyway—but the plum crop is coming in with a newfound aggression which can perhaps be attributed to an unusually wet winter.

Two plum trees grace the back yard. The shorter and more-accessible tree produces large fruit which sometimes gets so heavy its weight breaks the branches before the plums begin to ripen. One doesn't so much eat these plums as drink them. The tree is mature and scraggly in that way many fruit trees get. I've tried to clear dead wood out of it in spring and variously make its life a little easier (and these efforts are making some of the fruit more accessible), but it insists on engaging in mortal combat with cherry trees, grape vines, spurge, and the garage.

The second tree is less accessible: one must battle bugbane, a couple stray roses, some stray blackberry, unidentified vines, morning glory, and the threat of wasp nests and spiders in the cul de sac beside the garage just to stand near it. But it's certainly the taller of the two, with limber branches stretching 30 or 40 feet into the sky. And, until this spring, limberly into the wall of the condos next door. Handling that issue was an undocumented experience in fence-climbing and rope-throwing that I'm happy to leave to readers' imaginations.

Last year, the second tree failed to reward my attempts to get into its proximity by producing maybe a dozen tiny plums. But this year: oh my. The plums are still small (and less juicy) compared to the other tree, but they're just as flavorful. This year it looks like we'll get well over a hundred. 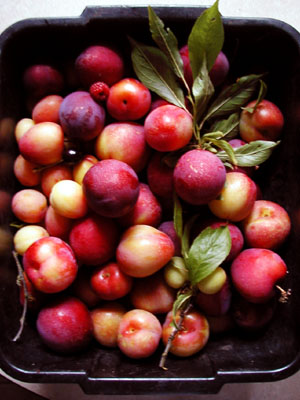 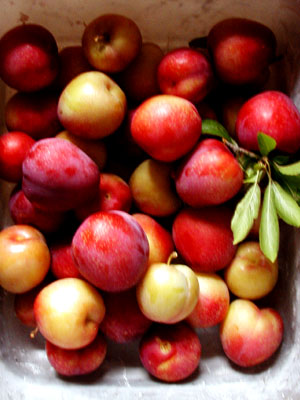 (If you look carefully at the first bin, you might spy a loose cherry and a handful of raspberries. The Yard apparently has raspberries. Who knew?)