When Darwin was coming up with his theory of natural selection, he certainly contemplated that traits and behaviors which further enabled the survival of a species were likely to be passed down to future generations, whereas dud features and bad behaviors were less likely to be propagated.

He probably didn't have fruit trees in mind as one selector for hominid development. 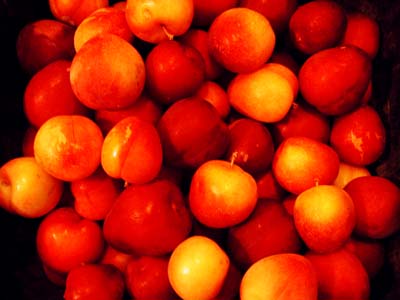 Plums a'plenty from the back yard.

I was smart enough to wear yard gloves while I ventured out there, reasoning that ripening fruit was probably attracting the small cloud of wasps adorning the tree's uppermost branches. I'm allergic to wasps—and bees, and probably shellfish too—so I didn't want to take too many chances. And I remember hearing that some insects like to burrow into ripening fruit and lay eggs there; when the eggs hatch, the larvae or nymphs have a ready supply of fructose on-hand to further their educations and development. And sure enough, several plums exhibited suspiciously insect-like entrance and exit wounds. Plop! Into the yard waste container. Hey, a moldy plum! Plop! into the yard waste container.

So far so good: my evolutionary forbearers haven't let me down. It wasn't until I realized there was a whole parcel of plums I couldn't reach from the ground that things got a little dicey. I go inside for a step ladder, thinking it would be great to get those plums off the tree before rain starts to fall. And it isn't until I'm standing on the uppermost step of the ladder, wobbling as the ladder alternately slides along and threatens to sink into the ground, trying to avoid being jabbed in the eye by the splintery collection of last year's branches, watching a plum in my hand disintegrate into a massive writhing collection of earwigs and hearing lightning begin to crackle overhead that I realize I've swum past the marker buoys of my genetic heritage.

But plums. Yow. Lots of plums. Red red plums. If you see me in the next few days, expect a gift bag.