Autumn has come to Seattle, which means the leaves are turning color, dropping, and—in this land of perpetual overcast and drizzle—quickly converting to musty, mushy, damp detritus.

This summer, I was grateful for the enormous big-leaf maple outside: it kept the house (especially the upper floor and my office) from overheating, and meant I didn't have to lower my blinds: neighbors or passers-by might be able to tell if I had a light on at night, but little else. Sure, I trimmed a few branches which were wavering a little close to the sidewalk and front stairs and was occasionally annoying by crows who organized a cawing festival in its branches every once in a while. But the maple was a blessing.

At least, until I started raking. So far I've gathered up, stomped, and compressed, and hauled over 300 gallons of leaves and seed pods from my yard, the steps, the street, the driveway, and my immediate neighbors's yards. (Because, who do I think I'm fooling? The collections of maple leaves in their yard only have one source.) And when I finish, remove my gloves, wipe the sweat from my brow, and think to myself Ah, that's a job well done!, I look up and see the maple is just getting started: 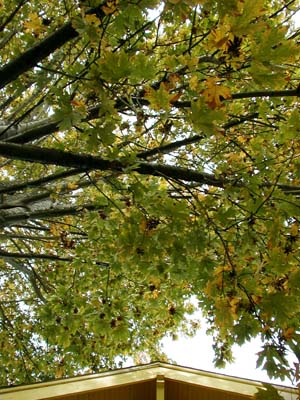 October 8: The maple laughs at my puny efforts to rake.

I think it's going to be a very long month. With lots of outdoor exercise.

But! A long effort of watering, pruning, cutting back lemon balm and keeping an aggressive grape vine at bay is (literally) bearing fruit! Americans aren't generally very fond of figs: although California produces a large fig crop every year, the Puget Sound area is generally considered to cool and damp to produce figs. Well, don't tell that to the folks who settled this part of Seattle decades ago: there seems to have been a strong Greek contingent here, evidenced by the smattering of long-established Greek eateries, backyards with roasting pits (often now converted to planters or other functions), and—at least behind this house—a fig tree trying to compete with the moss, maple, spruce, and plums. 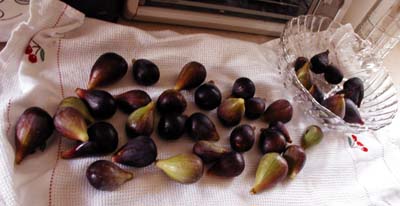 So, offered as evidence to all those who think you can't grow figs in Seattle, this first batch of black mission figs off the tree in the back yard. Looks like there will be two or three more batches in the next two weeks, and they're yummy.

Almost makes up for the maple out front.