Where two years ago we had more plums than we knew what to do with—in fact, we were stripping green fruit off the tree to keep the branches from breaking under the weight—last year proved to be a total bust. The tree basically took a year off, deciding it would only be producing about a dozen edible plums instead of several hundred, and that was that.

This year, the plum tree resumed more-or-less normal production, and we were prepared: instead of desperately giving away fruit to anyone and everyone before it spoiled, we broke out the jars and the pectin and went to work. I think this year we have close to 50 jars of plum jam this year, or about 30 points. 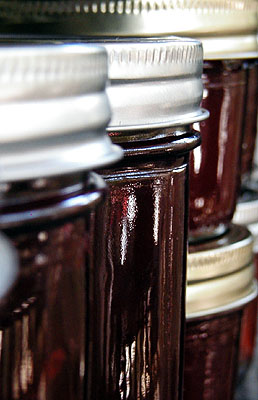 If you're expecting an unexpected gift soon…now you know what to expect. So far the jam has received rave reviews, and we even have an experimental "Berry Plummy Yummy" that's about 60 percent plum and 40 percent blackberry. Can't wait to learn how that turned out.