That Time of the Moth

The other day I was doing a (little) bit of work on the yard, when I noticed a sizable cocoon tucked up behind a downspout on the front of the house. Given that it was just a few feet from the Busy Squirrel and Raccoon Highway up the big maple tree, I figured the cocoon would likely become a tasty snack for a passing mammal or bird. But this morning I happened to glance that direction when I came up the stairs, and this fuzzy creature had just emerged: 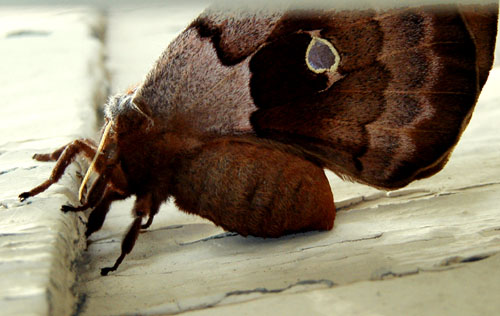 These moths aren't exactly uncommon in the Seattle area, but they still turn my head every time I see them. This particular specimen is a antheraea polyphemus,. or a polyphemus moth—they're big silk moths, related to Saturniidae like the luna moth. Although you can't see them in this photo, they moths feature two large "eyespots" on their hind wings that seem to confuse predators: when they spread their wings, they look rather like the face of a raccoon or cat. And they're pretty big: this particular one has wings about three inches long, for a total wingspan over six inches.

When they're caterpillars, they're the big squishy neon-green four inch-long caterpillars you see climbing trees and poles sometime, and they eat immense amounts of greenery—which is a good thing, because once they become moths they can no longer eat. At that final point in their life cycle, their mouths are purely vestigial: the moths live about a week, flying around madly to find mates and lay eggs before they expire.

This particular moth is probably female: males tend to have bushier antennae for detecting female pheromones, and less bulbous abdomens. But it's hard to tell: there's a lot of variation. 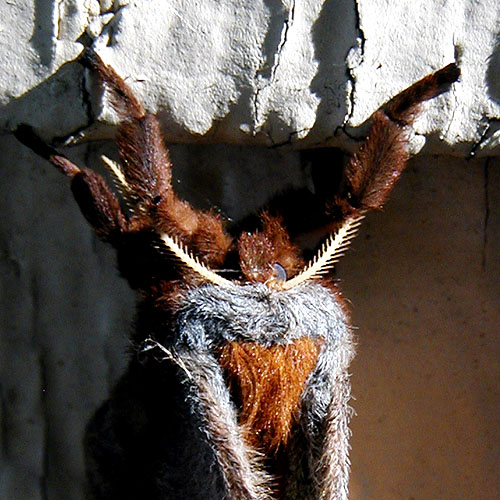 After a few pictures, I just wished this one well, and I hope it got its wings sorted out before a squirrel came along.