What a Tangled Web...

Among other things, October in the Puget Sound area means fog and spiders: 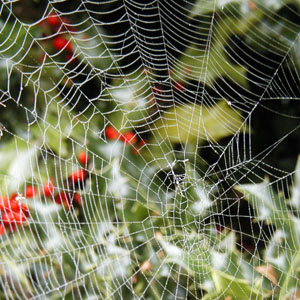 For whatever reason, the Puget Sound area is home to many varieties of cross spiders that construct orb webs: you know, those classic spiral/concentric circle spider webs spanning doorways, branches and other gaps. Sometimes the spiders lie in wait in the middle of the web, feeling with their legs for the telltale vibrations of a struggling insect. Others wait at the edges of their webs, out of sight on a branch, under a leaf, or taking advantage of some other cover.

Cross spiders have big abdomens with mottled coloration: usually the colors are variations of brown and tan, but sometimes they sport reds, yellows, oranges, and even greens and blues. However, almost all of them have a pattern of lighter spots which (if you squint a little bit) seem to form a figure like a cross or a Greek cross—hence (I think) the name cross spiders. They tend to hang with their heads downward on their webs, so the cross figure is usually inverted. 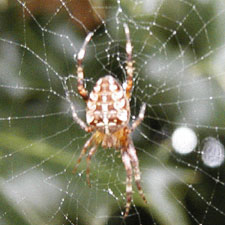 A typical cross spider
(Sorry for the fuzzy image: couldn't get the macro mode working right)

I've been told they aren't native to the Americas, but they seem to do particularly well in the Pacific Northwest. They aren't aggressive—they seem to treat people like we're just some bizarre bit of terrain—and so far as I know their bites aren't toxic to humans.

Nonetheless, most people seem terrified of cross spiders…because they often only encounter them by walking face-first through their webs. The feeling of a web enveloping your face—and, occasionally, a spider running across your face trying to get to a safety line—has been enough to induce heart attacks.

But I like cross spiders, and a still fog—or freezing fog—brings out the beauty, quantity, and sheer size of their webs. I think they're gorgeous.

And no, they don't make webs which span huge gaps of space by jumping or flinging themselves across enormous gaps and hoping to get lucky. They start their webs by letting a strand of silk be carried by the wind to another point. If it sticks, they pull it tight, then scurry back and forth along it, reenforcing this starter line with more silk. Then they go out to the middle, drop a loop of silk, ease down to the bottom of that and define a mid-air box. Then they build the web in that box. It's fascinating to watch: depending on the location, it takes a cross spider one to three hours to build a web.

And have you ever seen one of those weird blobs of spiderweb, maybe jammed in a corner, tucked under the eaves, or along the top of a doorframe? Ever wonder what's going on inside one of those? Lots of baby spiders waiting to hatch, perhaps? 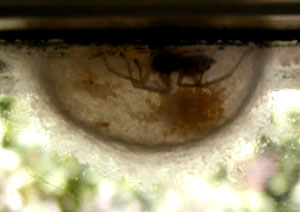 Momma spider and her eggs

Indeed, that seems to be the case: here's a picture of one that was build up against a window on the back of the house. No idea what kind of spider that is—it's not a cross spider—but the eggs are plainly visible. And mommy's right there, standing guard.