Seattle is well-known known for rain, but also for its mild winters. The waters of the Puget Sound tend to keep temperatures above freezing, and the Olympic Mountains shelter the city from much of what blows in off the Pacific.

This year has been an exception: November of 2006 was the city's wettest month on record, culminating in a snowstorm which paralyzed much of the city. December brought a major wind storm which knocked out power to well over a million people, and January brought more snow along with hard freezes which kept schools closed and streets treacherous for several days. 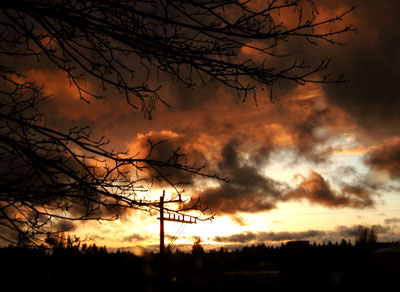 Sunset as a snow storm begins to blow into Seattle

One side effect of the hard freezes was a glorious morning of freezing fog, also known as rime frost. It's the first time I've ever seen it in the city of Seattle.

Basically, when the temperature drops below freezing, water droplets in the air tend to freeze and fall to the surface as ice. However, in circumstances where the droplets have no nucleus particle or nothing to freeze to, they can retain liquid form as supercooled water suspended in the air. When these supercooled droplets bump into something—a tree branch, a surface, a creature's lungs—the droplets form ice.

Most of the time—and especially at temperatures just below freezing—the ice from freezing fog sublimates (converts back to water vapor) almost as fast as it freezes to objects, so there's not much ice accumulation (or glaze). But at colder temperatures, the ice sometimes accumulates in feathery or needle-like structures on the wind-facing sides of branches, buildings, and…even spider webs: 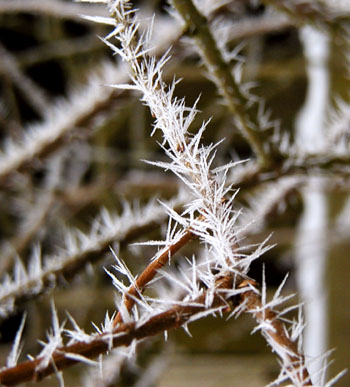 Rime frost on a branch… 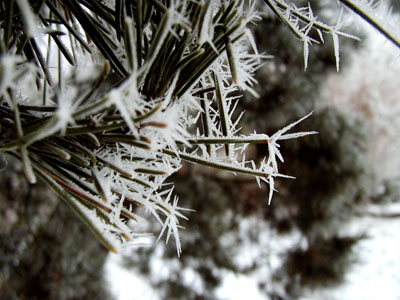 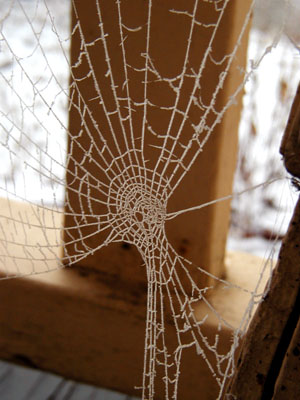 …and a cobweb on the porch.

Pogonip, or ice fog, is different than rime frost: we'd sometimes get small pockets of it in the Washoe valley where I grew up, but it's more common in sub-Arctic and Arctic regions. To get pogonip, you need high humidity (close to 100 percent), calm conditions, and temperatures at or below about 14°F (-10°C). (And, of course, you need fog.) With pogonip, the supercooled water droplets get cold enough that they turn to tiny ice crystals without a nucleus or freezing to a surface. These crystals usually fall slowly to the ground out of the fog in a mesmerizing, movie-like shimmering effect. Sometimes, these ice crystals are long and needle-shaped…and if you breathe pogonip in any form, you're going to damage your esophagus, bronchial tubes, and lungs. Hence the name: Pogonip is a Shoshone word for "white death." When I was a kid and started walking to school, my mother was concerned that I be able to recognize pogonip and, I guess, not get some wild notion to run into it, inhaling for all I was worth.

But today in Seattle, a respite: 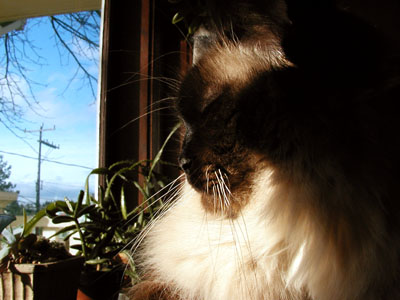 The snow and ice have melted off the roads, the sun is out, and the cats are grateful.