Yesterday morning seemed to start normally enough: I grabbed my coffee, sat down at the computer, started looking through the previous night's email…and then my peripheral vision picked up a large, dark shape passing quickly in front of my office window.

To understand, it helps to know my office is on the second floor of the house with two dormer windows overlooking the front of the house and the street. (Actually, it's probably more accurate to say I have a dormer office with two windows.) It's possible to open these windows, collapse the screens, and slip out onto the roof of the house—although the roof is steeper than it looks and the fall is farther than you'd think, so it's not recommended.

Anyway: the shape zips by and my brain says "Well, that was a heck of a lot bigger than a squirrel." Lenny and Squiggy have moved out of the big maple tree, but they and their posse off furry friends still regularly traipse across the roof to and use the tree as a convenient route between ground and roof. And I'm fine with that as long as they stay out of the attic.

My next thought was "raccoon," because raccoons have been known to hang out on the roof, tear at the flashing around the chimney, and generally make a nuisance of themselves until they're chased off. So I stand up to peer out the windows…and I see a cat staring at me forlornly from the tree: 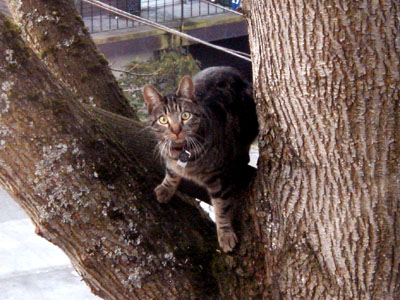 Humphrey's up a tree.

The kitty sees me, hops over to the roof, and comes up to the window to say hello. He looks like he's in good shape, and he's got tags: through the screen, I can just read that his name is Humphrey, and his people are on the next block over. And, no doubt cold and hungry, Humphrey is mewling away. My guess is he followed a squirrel up the maple tree and onto the roof and now can't see his way down. Cats are bad about climbing things and getting stuck: if they could bring themselves to climb down backwards they'd be fine, but…well, that's apparently less dignified than staying up high until hunger drives one to a foolish, madcap leap. 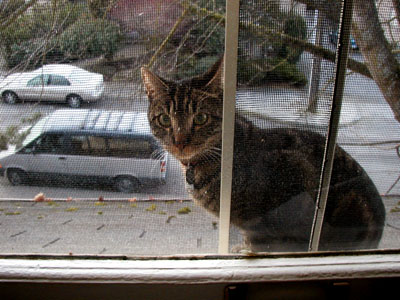 Humphrey at the window.

I have three indoor cats of my own: by this time, one of them has taken notice of all the cat sounds from my office and runs in to investigate. Despite Abhi's overwhelming good looks, Humphrey is not pleased to see his blue eyes peering out through the glass: he hisses, spits, and pounces at the screen. Abhi just seemed bewildered by the whole thing, which resulted in a few funny moments as they played hide and seek around the beam between the windows. 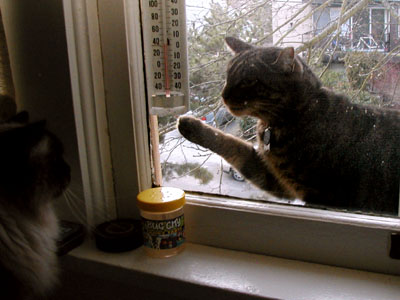 After about ten minutes, I decided it was time to do something stupid: I'd shutter my cats out of the office, open the window, take out the screen, and see if I could lure Humphrey inside with some cat treats. Being a big thinker, my plan was to wrap Humphrey up in a towel, then take him downstairs and let him out in the back yard—so if he freaked, he'd free madly into a neighbor's back yard, rather than out into traffic.

You'll notice one crucial item I omitted in my brilliant scheme: gloves. And I've got the crosshatching of scratches, claw-marks, and bandages on my palms and forearms to prove it. But at least Humphrey got back to earth unharmed.
Related Entries
Copyright © 2022 Geoff Duncan, all rights reserved.
Hey, what's life without fine print?