Why Do Bad Things Happen to Good Squirrels?

There are squirrels in the attic.

During the last few weeks their noises became more intense, and the grey, scampering traffic flow up and down the maple tree, across the roof, along the fences, down the power line, and across the street got more frequent. Instead of just three recognizable critters—Mama-san, IttBitty, and Scarface—new faces started to appear. High-speed acrobatic chases through the maple tree became more frequent. But when the occasional clatter in the ceiling turned to bouts of prolonged gnawing, it started sounding like a herd of elephants was stampeding overhead at three in the morning, and bits of pink insulation began tumbling down the roof…something had to be done. 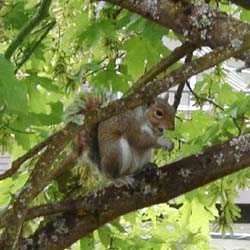 A picture of IttyBitty from mid-May, perched in the maple tree outside my office window.

So there's now a pair of squirrel traps on the roof, maybe four feet from the hole they've gnawed under the eaves for a den. And, let me tell you, for all their agility, squirrels just aren't very smart. The traps don't do unattended for more than about half an hour before a new guest arrives: apparently, squirrels just can't say "no" to free peanut butter.

Also: male squirrels just can't say no to female squirrels. Yesterday Mama-san was one of the trapped animals, and I got slightly depressed when the population of unknown male squirrels exploded on my roof top. They were everywhere, pawing, clawing, chewing, screaming, and climbing all over her cage. At one point I could account for six male squirrels within about 20 feet of my office window, none of which looked familiar to me—later, I would see a few of these "go home" to possible dens more than 100 meters (and several fenced yards) away. And, of course, the posturing, squawking, chirping, and chasing was relentless until Becky, the nice animal control lady, changed out the traps. (The presence of her young Corgy, Druid, probably sent the squirrels into hiding too.)

I think there's just one squirrel left—IttyBitty—who might still be in the attic. And I hope he gets the idea the place isn't safe anymore and moves along. But it was great to finally get a solid night's sleep.