Sometimes you've got to do what it takes to save plants—even if you're just saving them to eat later.

I've long shared my living space with The Monster Plant, a giant, sprawling thing which snagged me while I was innocently walking through a greenhouse at a local nursery several years ago. Since I love plants which look like they're from another planet, the creature came home with me. 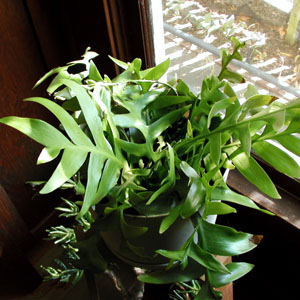 At the time, nobody knew exactly what it was, and it seemed no one had ever seen one before. It sported lengthy "leaves" which rather resembled a fern…except that it was clearly some sort of succulent. I didn't care: it was glorious, and it clearly belonged in a hanging pot with its enormous fronds looking like nothing so much as a flying space monster invading the room. Eventually, I figured out the Monster Plant was Epiphyllum chrysocardium, also known as Selenicereous chrysocardium or Marniera chrysocardium. It's an orchid cactus, native to southern Mexico, and it's an epiphyte, meaning it typically grows on other plants (in this case, large trees), and doesn't rely on soil, although it's not a parasite and doesn't harm its host tree. This explains why The Monster Plant was able to develop a wingspan over six feet across from a six-inch hanging pot. Eventually the fronds got so numerous and heavy that the plant literally started cantilevering itself out of its pot: I joked it was getting ready to take flight.

A few years later, orchid cacti began appearing at high-end nurseries, including a few Monster Plants. I was able to obtain a second, smaller specimen, and a few cuttings from the original Monster Plant have also been doing well. One's currently crowding out another variety of orchid cactus in what I call the "Grudge Match" pot.

Unfortunately, the original Monster Plant has not adopted well to its relatively new surroundings: it still had full aerial control of a room, and seemed to be producing the usual amount of new growth, but many of the oldest fronds began to wither, and much of the new growth was long, root-laden tendrils which never developed "leaves." Clearly The Monster Plant wanted to move, so I somehow removed it from the wrought-iron hanging loop and placed it in a location which allowed it more direct sun. At first it seemed to respond, producing many wide new fronds, but many of those eventually withered, and something slightly resembling scale turned up on some other fronds: I feared it might a mold.

Looking over the Monster Plant yesterday, it was apparent that the point of no return had come…and gone. There was no alternative but to clip off the healthy fronds and try to let them develop on their own, then cut back the Monster Plant in hopes it might recover. I didn't think I'd have the guts to hack into the Monster Plant, but once I started things went fast: it was over before I had time to think about it. The Mini Monster is the collection of healthy clippings from the Monster Plant—ironically, they occupy a larger pot than the original. Maybe one day, it'll be a Mega Monster!

Regular readers will know that there are plum trees out back, and the more mature of the two produces large numbers of big, very juicy plums. These aren't plums you cut up and put on your cereal: these are plums you bite into leaning over the kitchen sink and try not to let dribble onto your clothes.

This year, the plums are a bit different: maybe it was an unusually harsh winter, but the plums are smaller this year. However, there are bazillions of them—it's as if every bloom on the tree produced fruit this year. Immature, under-developed fruit began dropping off the tree as early as May, and the branches sagged heavily under the weight—a few even broke. I pulled off large numbers of immature plums from outlying branches to relieve stress on the tree, but even still, the experience of picking plums this year isn't so much pulling fruit off a branch but removing grapes from a bunch. They're everywhere.

I've been giving out larger-than-usual gift bags to friends and neighbors this year, but it was clear the supply of plums would rapidly outstrip demand—and that was after pulling probably 40 pounds of ripening fruit off the trees.

And so began my very first adventure in home canning.

First of all, I never understood why it's called home canning when there are no cans involved. Putting stuff in jars and calling it "canning" makes as much sense as putting people in trains and calling it "busing." But I don't get to make the rules at this late stage, so…there it is.

Searching the Internet for recipes for plum preserves, plum jam, and plum jelly turned up a widely disparate collection of allegedly perfect time-tested recipes. As far as I can determine, they're a bunch of hooey: about the only thing these recipes had in common were astonishingly divergent ratios of plums to sugar, boiling, and (occasionally) pectin. The barrage of inconsistent information led me to do what I normally do in the kitchen: wing it and see how things turn out. 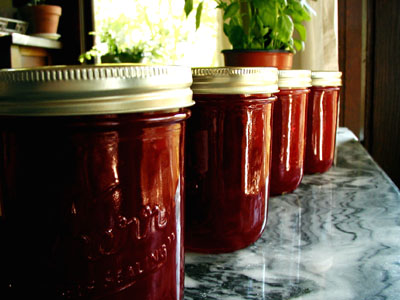 After many hours work and the production of a very large mess in the kitchen—and, yes, Gentle Readers, you will be happy to know I did see several recipes warning that ingredients must be measured "exactly" and, yes, I was repeatedly warned that my methods may not produce actual jams—there are 15 one-pint jars of "Plummy Yummy," all of which appear to have sealed correctly.

And no, not all of them look like they're going to "fix" into a jam or jelly. We'll just call those syrups, sweet plum sauce, or maybe just the basis for a winter cobbler. But it looks like about half did fix into respectable jams and jellies, and that's not bad for a first-time effort and being unwilling to follow inconsistent directions!