Seattle's weather turned friendlier in the wake of The Great Squirrel Roundup. I gather traffic is absolute hell out there. 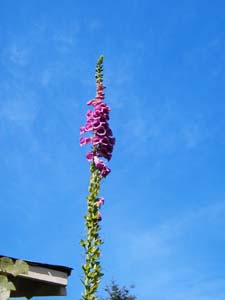 The current foxglove champion draws up over eight feet in height.

The back yard features several foxglove, several of which I suspect are unintended self-seeders. One of these seems to have a bit of initiative and wants to give the fig and plum trees a run for their money...and wisely leans away from the death clutch of a nearby grape vine. If you clip the top off a foxglove's main stem, it's supposed to develop new shoots which continue to flower. This one already has over half a dozen shoots coming off the main stalk, which continues to grow and flower. I'm hoping it reaches nine feet. Foxglove extract—aka digitalis— has been used for centuries to control the heart rate...and also as a poison and a treatment for dropsy. I assure readers these—and the nearby poppies—are for decorative purposes only. 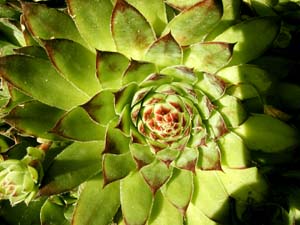 Look into my eye. You are getting very sleepy...

Out front, a bed of sedum is flourishing, despite a great deal of foot traffic and discarded candy wrappers from weekday after-school sugar-fixes. I've always had a thing for hens-and-chicks: they survive in difficult spots, they're weird and alien and infinite in that fractal way of bromiliads and broccoli romanesco, and the last thing you'd expect to be common in yardscapes in the famously rain-soaked Seattle area. Being succulents, you'd think they'd rot. They don't. They thrive in crannies between rocks, next to sidewalks, along retaining walls, and in the tiniest bits of unintentional landscaping. Why these haven't taken over the world, I can't say. Behind the scenes sweetheart deal with the cockroaches? A non-competitive clause with kudzu? 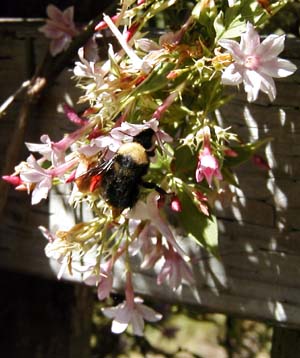 What outdoor experience is complete without wildlife? In the wake of the squirrels the place has attracted an inordinate number of sparrows, swallows, and finches (including robins), plus regular hummingbirds at the clematis in the back. (Alas, I think a standing fuscia is coming in too late—and too short—to be a hummingbird magnet.) But the large, dark, slow-moving shape you see out the back window next to the hummingbirds? The thing knocking petals loose and variously wreaking havoc on the clematis as it tries to land? That's not a bird. That's not a mammal. That's a frickin' huge bumblebee.

I grew up in northern Nevada, where "bees" are smallish, barely-furry orange-and-black striped things which are mostly hazardous because they love dandelions and lawn clover, and are thus likely to be right under you when you get tackled playing football in someone's front lawn. These were apparently common honeybees. Out here in Seattle, I see these old familiar honeybees but also what I was told while I was living in Ohio were "bumblebees," because they're furry. (The hair is called pile, and some species even have it on their eyes.) I took to calling them bubba-bees because... well, let's face it, they look more portly than honeybees. But they're hardly giants when compared to, say, a nickel.

Not so with Gigantor, here. He's over an inch long and not exactly a graceful (or quiet!) flier: he's been known to land on bit of a plant and then tumble all the way to the ground because (yep!) the plant broke under his weight! I normally see him—or his nest-mates or relatives—out at the clematis because all the foliage falling off it catches my eye, and I wonder if maybe Brutus or Cleo (two neighborhood cats) are going after a hummingbird out there. 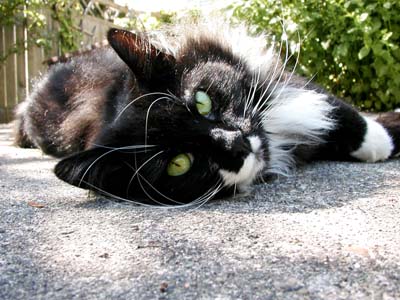 Speaking of neighborhood cats, no time spent out back is complete without supervision from Brutus, whose inquisitive yet hands-off managerial style is essential for getting the yard squared away just how he likes it. Brutus apparently "lives" a couple houses away, but recently moved into the next-door-neighbors' basement...much to the distress of their indoor-only kitty. Brutus is people-friendly and very sociable: just don't make the mistake of trying to rub his tummy when he rolls over in front of you. He's a hunter-cat, and I've got the scar to prove he doesn't really want you rubbing his tummy. Brutus believes he's in charge of the neighborhood, although a Siamese named Cleo who also patrols around here seems to want to dispute that sometimes. Brutus and Cleo don't really get along, but they seem to be having fewer yowling-and-posturing contests than a few months ago. However, Brutus is my buddy: Cleo doesn't really want me within less than ten feet of her—despite having rescued her from Brutus on a few occasions!