The Gentle Readers may recall the current abode has a small but rather elaborate yard, in which a notable variety of flowers, trees, and other flora have been cultivated over the years. Gentle Readers who have seen the yard in person have probably heard me mention that, while I try my best to keep up with it in the spring, once the bees and wasps move in I mostly abandon it until late October or early November, when I can do at least some preparation for winter without risk of being stung. The eaves of the garage out back provide homes to hundreds of wasps (fortunately, not yellow jackets!) and vast hordes of bees love the oregano, lemon balm, roses, jasmine, poppies, and the other flowering plants. We get ordinary honey bees, what I call "bubba bees" and Goliath Bees, and along with what I call "wide bodies," which are about the size of honey bees but have wide, shallow abdomens.

Anyway, I still find myself out back sometimes. Just yesterday, I was building some makeshift tulip planters (because that time of year is coming) and then I saw 'em again: The Green Bees.

See, the back yard seems to attract a flying insect that looks like a bee, but which has a bright, iridescent green head and thorax. (The thorax is the part of a bee which joins the head and abdomen, where the wings and all the legs attach.) Of course, when I mention The Green Bees to someone, they put on one of those Pshaw! faces, and say "No way!" Indeed, I suspected the insects might be flies masquerading as bees. After all, many flies have iridescent blue, red, and even green coloring. It's not hard to imagine that a fly had evolved a yellow-and-black striped abdomen to pose as a bee—and thus be less tempting to predators—but without entirely having evolved away from iridescent coloring. Right?

So, then, why are these flies buzzing from flower to flower, maneuvering like bees, and making little "floaties" of pollen around their legs, just like regular bees?

Of course, when I want to point the Green Bees out to skeptical visitors, there are none to be found. But yesterday being a sunny day—and having finished a couple tulip planters—I noticed there were some Green Bees buzzing around. So I grabbed my camera and…got lucky: 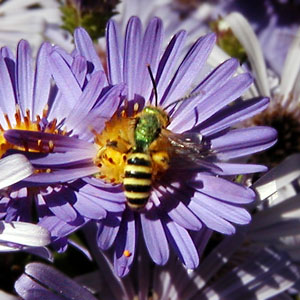 It seems my Green Bees are a species in the large Halictidae family (maybe in the Agapostemon group) of so-called "sweat bees," which are apparently drawn to perspiration. Apparently they're considered common all over the Western hemisphere, although I can't recall having seen them before moving to Seattle proper. 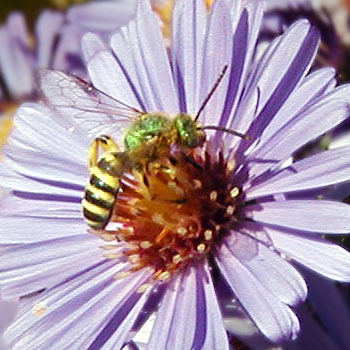 Getting these pictures was…fun. The home video release of the BBC documentary series Planet Earth includes segments called "Planet Earth Diaries" which highlight aspects of making a particular episode— usually the excruciatingly long, boring process of trying to get particular video footage. Sometimes this involves having photographers sit in miserably uncomfortable blinds for days on end hoping to spot an elusive predator; sometimes it's an entire camera crew trekking lugubriously through inhospitable waters and/or terrain just trying to locate their subject. Inevitably, the BBC crews seemed to get their shots on the last possible day they could be in a location…which gives the inadvertent impression the in situ producers are creating the "Diary" so they have something to show when they get back to London to justify all the expense of their expedition. "Well, no, sir, we didn't get any footage of snow leopards," you can imagine them saying to their irate bosses. "But look! We did work very hard!"

Taking pictures of bees in the backyard, I got a little mini-experience of what like might be like for nature photographers. You can't just walk up to a bee, stick a camera near it, fiddle with settings, mutter "Say cheese!" and get a good shot. The bees fly away when you get near them, and they don't stay in one place very long.

Eventually the bees will forget you're there—or just assume you're a rock or something—so they start coming back. Inevitably, they'll land on the bloom three inches to the right of the one you chose, or land next to your flower, walk all around it, but never actually go in. Resist the temptation to move your camera just a little bit to reposition your shot: once you do, the bees all get some distance from you…and the waiting game begins again.

Of course, you always wind up in a not-very comfortable spot. My feet and legs both fell asleep, then went almost entirely numb. I wasn't sure how I was going to stand up without falling ass-over-teakettle into bee-populated foliage…but, dangit, I was going to get my shot! 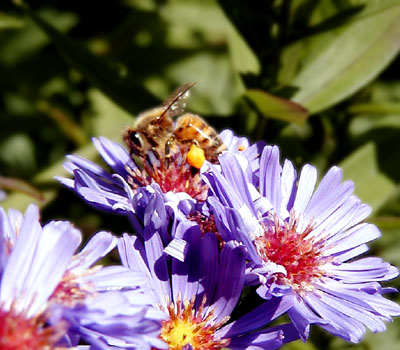 A honey bee—doesn't the pollen look like floaties kids wear to a swimming pool? 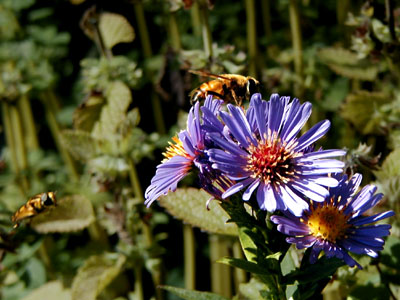 Oh. And with all this getting up close and personal with bees—and setting myself up in the middle of them so I couldn't feel my feet, stand up, or walk—did I mention the reason I stay out of the back yard in the summer is that I'm tremendously allergic to bees?