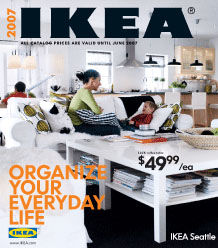 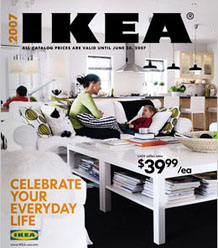 The top cover is Seattle edition of the 2007 IKEA catalog; the U.S. edition is below. See the $10 difference?

It's well-established in contemporary culture that the free printed catalog for the Swedish home furnishing chain IKEA is one of the largest publishing endeavors on the planet, pushing out 160 million copies of its 2005 edition and a reported 174 million copies for the just-published 2007 edition. These huge numbers probably strike some U.S. readers as odd: IKEA only opened its first U.S. store in 1985, and currently only has about two dozen U.S. stores and franchises, concentrated in California and the northeast coast. Unless you live in one of IKEA's main U.S. target markets, you may not be familiar with it. But trust me: IKEA is a huge worldwide enterprise.

The publishing figures for the IKEA catalogs surpass estimated annual print runs for the Bible, although there's no real way to know by how much owing to the Bible's abundant translations, editions, and versions. (The IKEA catalog is also available in multiple languages—more than 20—and localized editions, but at least it don't have to cope with doctrinal differences!) IKEA could probably move many more catalogs if they liked—it's not uncommon for IKEA catalogs to be scarce by the end-of-year holidays. But the catalogs are free, so IKEA controls its costs and sticks with carpet-bombing their market areas once a year, every year.

I'd never heard of IKEA before moving to Seattle, and I was initially impressed: some of the minimalist Scandinavian lines and blonde woods appealed to be, and the store offered some inexpensive stuff which wasn't stodgy. IKEA obviously does very well making products affordable rather than top-drawer, and, yes, I have IKEA stuff around the house. The obligatory BILLY bookcase units, some lamps, a couple side tables, jars and kitchen stuff, and what I call the Test Pattern rug.

So, when a new catalog arrives, I flip through to see if anything looks cool and meets any immediate or near-term needs. I still think some of the items are cool—and IKEA is marketing some decent-quality stuff these days at good prices—but I'll be the first to admit a lot of the merchandise is kinda cheap and chintzy, and I'm a little miffed prices at the Seattle store (good for a year!) are higher than those advertised elsewhere. (Does a coffee table really cost 25 percent more in Seattle than the rest of the country?) 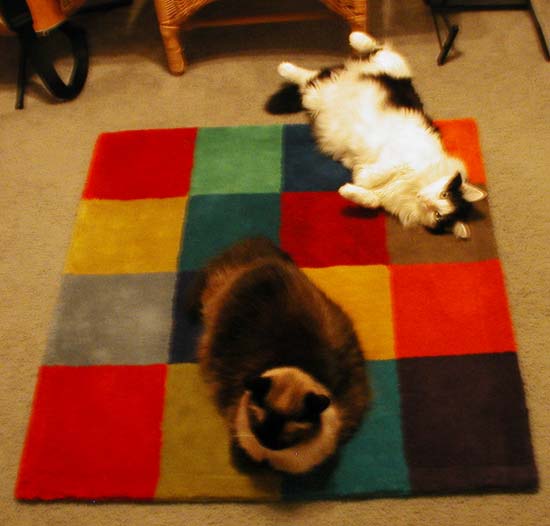 Abhi and Pugsley playing on the IKEA "test pattern" rug. I think Pugsley lost points in the game when his butt rolled out of bounds.

Anyway—over the course of a few breakfasts and a couple snacks, I realize I'm scrutinizing the catalog images, turning them left and right, squinting at details. If numerologists pore over the Bible trying to derive encoded messages from God…do catalogogists sift through the IKEA catalog, looking for hidden messages and meaning?

I become obsessed with the bookshelves. The catalog features full-page photos of living rooms put together using various IKEA products, and many photos feature packed bookshelves—the Swedes are great readers, apparently. In years past, I've noticed coffee table books with Swedish titles on the spines in the catalog photos, often turned upside down or at angles so the writing doesn't distract from the photo. But in the 2007 catalog, the art directors for the living room shots must have ordered a whole flatbed truck worth of remaindered books, because they are everywhere, with some rooms tricked out nearly floor-to-ceiling, wall-to-wall. Shelves, everywhere, crammed with books.

What are those books?

Most spines can't be discerned in the photos, even with a magnifier (um, yes, I tried). And many books aren't in English so I'd only be guessing at titles. But given the mammoth size of the IKEA catalog print run, I've got to wonder if there isn't some co-marketing or product placement action going on with these bookshelves. I mean, 174 million copies! Who wouldn't want to reach that audience?

There's a Monopoly set peeking out from under a coffee table (page 103), and www.gourmet.se appears on a book binding behind an entertainment center's glass door (page 102). Intentional? A Tom Clancy tome is wedged high up on page 95 (and again on 111), a book called De heta ären (which translates to the hot...arena? game? I have no idea) appears often—sometimes repeatedly in the same photo. Parts of many yearbook and anthology sets appear, one called Focus is scattered everywhere with numbered volumes ranging from 6 to 86, along with numerous slim volumes titled 1994. And, hey, look! There's Inger Edelfeldt's 1978 novel Hustru (Wife) in plain view on page 105. You did read that, right?

But the big winner of the 2007 IKEA catalog is David Baldacci's 2001 Last Man Standing—translated as Till Siste Man ("the last man"), which appears no fewer than nine times (once upside down!) on the spread spanning pages 110 and 111. Baldacci's tome also appears liberally throughout many of the other bookcase shots. (Once you see the binding's silhouetted figure in either white on black or black on white, it's hard to miss!) How much did your publisher pay for that, David?

Yeah. I need to take a trip to the recycling bin right now.