So the 2009 IKEA catalog landed on the doorstep in the last few weeks. I am pleased to report, unlike the 2007 edition, Seattle recipients don't get a version with cover prices jacked up higher than the rest of North America. 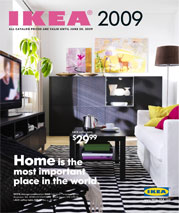 I haven't had time to give the new catalog a thorough poring-over: unlike 2007, my breakfasts these days have consisted of a hurried shoveling of cereal and quaffing of coffee rather than a leisurely ten minutes at the kitchen table casually flipping through things. But at first glance, the catalog looks to follow in the footsteps of the 2008 edition as a loser for those of us who like to scrutinize the sets for small details. Sure, here and there an Xbox peeks out of an entertainment center, both Macs and Dells occasionally appear on desks, and there's a two-page spread that almost seems to focus on a mammoth green hardback edition of Paperbound Books in Print. But many of the books, DVDs, and magazines shoved into the oh-so-very-affordable furniture are deliberately faceless, too small, or (seemingly deliberately) out of focus for a close reading. Those of us looking for hidden messages, subtle humor, or incongruous details will be a little disappointed. 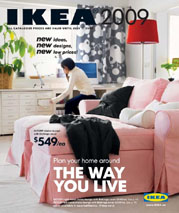 But lest IKEA catalogists/remainderologists despair that, perhaps, the mammoth Swedish company might be using different print material for its set decoration…well, the IKEA catalog's now-traditional love affair with author David Baldacci seems to be strong as ever. On page four, astute readers will spy a bookshelf with no fewer than three copies of the Swedish translation of Baldacci's Last Man Standing—in Swedish, Till Siste Man—and page eighty-one features a bookcase with no fewer than four copies (one apparently a different edition!) of the same thrilling tome. Apparently IKEA believes its customers can't buy just one copy.

And for all the IKEA nuts out there, I should note that IKEA produces different versions of its catalog for different markets. And yes, that's an Apple iMac blatantly featured on the cover of the Canadian edition. It must be a conspiracy!