Oh, the satisfactions of urban living.

A little before 1:30 AM, I wake loud grinding sounds and a car alarm going off. Concerned that someone has pulled into the parking strips next to the house and perhaps collided with a retaining wall, I peer out the window, but see nothing. Switching rooms (and windows), I see the source of the noise: a mid-90's Tercel in the middle of the street, revving its engine to maybe 5,000 RPM, making loud clanging and grinding sounds, and going up hill at a snail's pace. Wait, no, scratch that: the engine is revving for all its worth, but the car is actually creeping backwards downhill, making grinding and clanging sounds. Brake lights and reverse lights turn on and off, the driver coasts the car backwards a few feet then…stops. And turns off the engine and the lights.

The street out front isn't very wide: there's space for cars to park on both sides and leave one lane of through traffic. The Tercel has neatly positioned itself to block all traffic up and down the street.

I figure this is going to be bad, so I leave the window to find some sweats, my keys, and some shoes, then head outside.

The Tercel is right where I last saw it, blocking the street—except now, no one's in the car. The doors are locked. I can see the driver's side front tire is history, and there's a big dent in the rim like someone took a curb head-on at a decent clip.

A car comes down the hill, honks at me to get out of the way. I walk up: driver rolls down the window to curse at me. I explain the Tercel is not my car, I just live on the street, have no idea where the driver is. The motorist curses me again, spits at my feet, and reverses back to the intersection at the top of the hill and takes an alternate route.

I start to think staying outside with the abandoned car is not going to be very productive.

Back inside, I call 911 to report an abandoned car blocking the street. To my surprise, the operator actually knows the street: "Oh, it's right where the curb juts out for that power pole?" "Yep." "That's bad. We'll get police on the way." I wait by the window for about half an hour, counting another 14 vehicles who try to traverse our street, but give up when they find it blocked. Now it's about 2:10 AM, but at least no one's spit at me for a while.

A pedestrian comes up the street, walks up to the car, walks around the car, puts a hand to the driver's side window, and immediately jumps back, pulls out a cell phone, and starts looking at building numbers. I realize what he's doing, grab a coat and head back outside. "There's someone in there!" he says, pointing to the car. "I just called 911!" And sure enough: now the driver's side seat is reclined and there's clearly someone lying down in the car. I'm sure no one was in the Tercel when I looked earlier: plainly, when I came back inside and puttered around for a few minutes, the driver—or someone with a key—returned to the car and decided to take a nap. I tap on the glass: no response. I tap again.

"Do you think he's dead?" asked the pedestrian.

"There's some fog on the windows," I say. "And he wasn't here maybe half an hour ago when I called the car in."

Seattle Engine 21 arrives lickety-split—and it's no small feat maneuvering a fire engine through these streets—and I've got to hand it to the firefighters: they didn't waste any time with th emergency rescue thing. Pounding on the glass, banging on the roof of the car, shouting "Fire department! Can you hear me? Open up!" They rock the car back and forth, bounce it on its suspension. No response, so they break a small rear window farthest away from the occupant to open the car.

Now the occupant sits bolt upright! Falls down again. Sits up again! Falls down again. Fumbles with a door latch and nearly rolls out of the car. Firemen get the occupant to a curb, bring over the medical kit. The man is moaning incoherently. By this time the police have arrived: three patrol cars' worth. the medics examine the man while officers point their flashlights into the Tercel, but don't actually search it.

Eventually the firemen determine the car's occupant is intoxicated but otherwise unhurt: they pack up and get the engine out of the way. The occupant has no ID and refuses to give officers his name, but agrees to a field breath analysis test which he promptly fails. Officers now cuff him. search him, search the Tercel, and put him in the back of a patrol car. Two other officers stay to document the scene and wait for a tow truck to get the Tercel out of the street.

"I thought he was dead," repeated the pedestrian.

At this point, I'm finally able to approach one of the officers: "Hi, I live in the house right back here: would it be OK to check to see if this guy did any damage to my girlfriend's Celica, here?"

"Certainly. Just don't approach the patrol car, and let me know if you find anything." 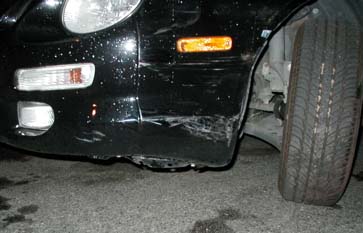 A front wheel twisted to a rather unnatural angle.

Sure enough: driver's side quarter panel is neatly sideswiped, front left tire is twisted out of alignment. The car is undrivable.

I go back inside for a camera, take some pictures—and check over other cars on the street to see if any of them got dinged, although I don't see anything obvious. The officer provided an incident number to track the case, although, without ID or insurance information on the driver, there's no saying how this is going to play out insurance-wise. Not in a fun way, I'll bet.

I moved into the city why, again?