What is it about the middle of May? Is it like "Pick on Geoff's Car" week? Last year someone decided a paper grocery bag with muddy tennis shoes in it might be worth stealing, so they smashed in my passenger-side window. I wasn't there, didn't see it happen, but I'm still finding fragments of safety glass every time I clean out the car.

This year it seems more personal.

Last night I'm headed home on I-5 northbound when a red late-model Dodge Ram pickup pulls up behind me fast, riding my bumper, flashing its lights, and honking its horn. There weren't many people on the freeway, I'm not an aggressive driver, I didn't see it, but OK: maybe it's possible I cut him off or did something to merit honking. I pull over a lane out of the Dodge's way to let him by.

No. The Dodge stays behind me, riding my bumper at 65 mph, honking its horn, flashing is high beams, swivelling back and forth in its lane, driving very recklessly. I figure, this is why I have a turbo engine: I high-tail it over the ship canal bridge, getting some distance between me and the Dodge, and hopefully leaving the whole incident behind me.

No. In my rear view mirror, I see the Dodge following me through traffic, maybe 100 yards behind me. I'm wondering what I've done to them: at this point I'm sure I didn't cut them off. Maybe they've mistaken me for someone else? But the Dodge drops back, so I take my normal 85th Street exit, hoping the Dodge will continue on its merry way.

No. The Dodge follows me off the freeway at 85th and catches up to me at the first stoplight. Right on my bumper again, horn blaring, high beams on. Now I can hear its stereo pounding away, and there's an arm hanging out the passenger side window gesturing at me. Through the headlight flashes I see at least three people in the cab. The traffic light has just turned green so neither of us come to a complete stop: I pull forward as far as I can and take the opportunity to memorize the license plate centered neatly in my rear view mirror. As we move further along 85th, I move to the right lane, hoping maybe they'll go by and aren't dumb enough to try to sideswipe me.

No. They drop in right behind me, staying on my bumper. The next light is Aurora Ave. and I have no choice but to come to a stop. They stop right behind me, rev their engine, honk their horn, flash their high beams. There's some shouting, then the Dodge hops forward and not-so-gently bumps my car. So when I see the passenger door open and one of the three passengers gets out and starts toward my car, I've already made up my mind: I'm over a bit of curb and going the wrong way through a Jack-in-the-Box drive-through lane, then out onto Aurora Ave. north, hoping to leave them behind.

No. This is Aurora, an area probably most known for hookers and street dealers, and it's kinda late at night: there's gotta be an officer out here somewhere. I'm scanning all the cars going both north and south: nothin'. But apparently my pursuers are thinking the same thing, because when they catch up with me, they stay a couple car lengths back, immediately aping my lane changes, but staying off the horn and high beams. For whatever reason I hit a series of green lights, and they stay right on me. I'm starting to wish I drove something slightly more difficult to recognize than a red VW New Beetle.

At 130th Ave, a coincidence of other vehicles and traffic lights lets me pin the Dodge behind a minivan at the intersection while I make a right-on-red and slip away. I make three quick turns to stay out of lines of sight - the rear lights of a Beetle are kinda distinctive - pull into dark, obscured driveway, kill the lights and engine, then abandon the car, arming the alarm as I scamper back across the street and step into a dark shadow around the corner of a building. I figure if they see the car, I'll hit the panic button on the car remote, and make a run back toward Aurora on foot, through parking lots and between buildings where they won't be able to follow me in a truck.

About a minute later, I see the Dodge cross the intersection at the end of the street, but they do not turn up toward me, and they could not have seen my car from there. I wait probably eight or ten more minutes, waiting to see if they double back. When they don't return, I go back to my car and head home, avoiding Aurora.

A call to the police—with that license plate number and description—revealed the Dodge was stolen in Sea-Tac earlier that night. While the police wouldn't discuss an ongoing investigation for obvious reasons, the thought was that these were kids who'd jacked a truck and were just out harassing random motorists.

Then this morning at Home Depot, there's a jackass pushing his big orange cart of particle board and sheetrock across the parking lot as I leave the store, having basically struck out again. (I don't much like Lowes, but I sure have better luck finding what I need there than at Home Depot.) Oops! Jackass-with-cart has a cellphone ringing in his shirt pocket! Fumble fumble fumble Hello? Hello? Yeah yeah CRUNCH. That's the sound of Jackass pushing his orange cart into the front driver's side of my car. 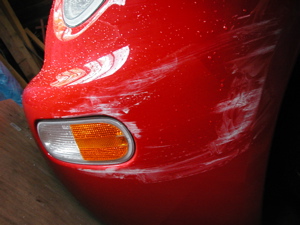 Jackass leaves some distinctive scrapes and scratches on my car's left front panel; at least the light and turn signal weren't damaged.

And what does Jackass do? He pulls the cart off my car, and continues on his merry way to his pickup. I catch up with him: "Hey, that was my car you just smashed into!"

Jackass turns. "It's nothing. No problem." And starts loading up his truck.

"Doesn't quite look like nothing from here. I need your name and insurance..."

"Go to hell." Followed by an impolite gesture.

Rather than get into a fight in a parking lot with a large man who had a pickup truck full of tools, I wrote down his plate and inspected the damage to my car. He peeled out of the parking lot.

I figure the police aren't going to do anything about something like this. But, you know, I bet my insurance company will be more diligent about pursuing the case. I know the odds are I'll never figure out who he was, and, even if the insurance company finds him, he'll probably have no insurance. But I'd like to see the karmic wheel come around and nip him in the ass anyway.