[The following is adapted in part from a forthcoming article, although the material here is presented here more informally and with personal asides.]

I've been having one of my little musical crises. Typically, my musical crisis story is that I spend months or years experimenting and tweaking with a particular instrument, piece of gear, or set of musical techniques. The amount of effort, blood, time, and money involved varies, but is usually non-trivial. Eventually, I either decide the thing I'm working on is a bunch of hooey, or I arrive at an acceptable level: I get the thing working, find a solution, make it sound at least okay, or figure out how to get the sound under my too-wide fingers. And then, something new happens and my perfectly reasonable proficiency, workaround, or solution goes straight to hell. Hence, crisis.

Lately, my problem is bass strings.

First, a quick primer on electric bass guitar anatomy. The drawing next to this paragraph resembles a Fender Jazz Bass, which was introduced in 1960 and remains a de facto standard today. Bass guitars have many design components, but three are most important here: the scale length, the pickups, and the strings.

The scale length of most stringed instruments is dictated by their design and (usually) can't be changed (much). This means all the strings vibrate at more or less the same wavelengths, so the only way to vary the pitches of different strings is to change their tension and/or linear mass. But it's a balancing act: strings can't have a tension so high that they break easily, are too difficult to play, or put so much load on an instrument they damage it. (Bass strings typically produce 30-50 lbs tension each at standard pitches). Similarly, strings can't have tensions so low they flop around, buzz, clatter, or fail to produce musically useful notes. Even more constraining, strings need to have pretty similar tensions to each other to be playable: tight strings mixed with floppy strings is not a recipe for success.

This means linear mass is a primary variable in a given string's construction. But, funny enough, if you look at a string's specifications you're not likely to find its linear mass listed. Instead, you'll usually find the string's diameter or thickness, usually measured in thousandths of an inch. The diameter is an indirect assessment of a string's linear mass (thicker = more mass, leaving aside details of construction and materials). It's also a simple number musicians can wrap their heads around. When referring to strings, most musicians multiply the numbers by 1000: a guitarist talking about a set of 10's or 12's is referring to a set of strings where the highest (thinnest) string has a diameter of 0.010 or 0.012 inches.

A four or five string bass produces low notes between roughly 31 and 41 Hertz, or vibrations per second. Producing notes that low at playable tensions means using thick (i.e., high mass) strings. Typical low bass strings measure between .090 and .130 inches in diameter (2.9 to 3.3 mm), with the thickest string on a four-string bass guitar usually being around .105 inches (2.66 mm). A string around an eighth of an inch thick may not sound like much, but they're big: other musicians have asked if I get my strings off suspension bridges.

Now, sure: it's possible to extrude a single wire (called a monofilament) that's an eighth of an inch thick: that's roughly the same as 8 gauge wire. You know, the kind of thing used to make cattle fencing. But, again, scale length and tension are problems: regardless of alloy, a steel monofilament that thick doesn't produce appropriate pitches at playable tensions.

But! It turns out there's a way to add mass to a string without dramatically increasing its tension! String makers do this by wrapping (or winding) a monofilament string with additional wire. This wrapping can add a lot of mass to the string (enabling it to be tuned lower), but the overall tension is very similar to the original monofilament, which is still bearing almost all the load. So, you can produce thicker strings with the same length and very similar tensions which are playable at lower and lower frequencies.

This is exactly what you see in essentially every set of metal guitar and bass strings on the market. Several (or, in the case of bass guitars, all) the strings have similarly-sized cores, with different layers of wrapping to produce different pitches. Generally, the thicker the wrap, the more mass is added to the string, and the lower it can be tuned. This can also have implications for intonating an instrument, a process by which the instrument's bridge (and sometimes neck) are adjusted to make sure fretted notes are in tune. Without getting into the whole art of instrument setups, more-consistent cores across strings means instrument bridges don't have to have tremendous amounts of mechanical adjustment capabilities to let the instrument play in tune: a little wiggle room can go a long way. This may make engineering and manufacturing a bridge somewhat less challenging.

Remember when we were discussing scale length, above, and I noted that the vibrating portion of a string (which produces notes) is less than the total length of the string (which needs to go out to the tuners and the bridge)? Well, an interesting property of wrapped strings is that the extra mass of the wrapping only needs to be present on the vibrating length of string, not the entire length of the string. So, there are a couple different ways to design these wrapped strings: some have the extra wraps extending for the full length of the string, while others, called taper-wound strings, only have the extra wrappings on the vibrating portion of the strings. The parts which go out to the tuning pegs and through the bridge are much thinner. This can have important implications, because taper-winding enables bassists to use strings which would otherwise be too thick for their bridges and/or tuning pegs.

Wrapping strings is a tricky business. String makers already have a tough task to produce single-wire strings with a uniform gauge and consistency. In fact, when you get a "bad string" in a package which just doesn't play in tune on certain notes, the problem is usually a goof in the string's gauging or alloy: it's thicker or thinner somewhere along its length, or the metal isn't quite the same consistency throughout. Nothing to be done but replace it and hope for better results.

Same with wrapping: the wire you wrap around a string has to be of consistent composition and thickness. But it also has to be wrapped consistently and snugly at high tension. It has to be reliably clamped, soldered, or tied off at the ends of the string. And it can't slip, unwind, or slide around while the string is being played! Tough proposition, and this is why strings are wound on precision equipment in only a handful of facilities. Rumor is that most string manufacturing in the U.S. takes place in only three factories, despite the dozens or hundreds of individual string brands. Many of them are made on the same equipment by the same manufacturers, although (of course) different brands use different alloys, techniques, materials, and specifications.

A Hex Upon Thee

An illustration of a double wound string with a so-called hex core. Double winding is common with piano bass strings; some boutique guitar strings (e.g. Newtones) are double wound, and some bass guitar strings (like DRs feature as many as six wraps.

The process is even more complicated by a string's core. Wrapping round wire consistently around another round wire is a very precise process, so wound strings tend to be more difficult to produce and, thus, more expensive. In order to reduce the difficulty and cost, years ago U.S. manufacturers started experimenting with so-called hex core strings, where the core filament isn't round, but features an angled cross-section. (The term hex is a little misleading: these cores are usually four-sided.)

Strings with hex cores are stiffer than strings with round cores—which makes sense, because the mass of the core is varies across its section, affecting the way vibrations sustain and propagate. So, hex core strings are less flexible and are often felt to produce a harsher, less musical sound. Some musicians don't mind—some no doubt even prefer it!—but others don't care for hex cores at all.

You may also have noticed that wrapping a string with round wire leaves tiny air gaps between the wrappings and the string's core. This means that, all other things being equal, a wrapped string of a particular diameter has less mass than a solid string of the same diameter. It also means there are little areas where grime, dirt, moisture, and corrosion and accumulate. These gaps are larger on hex core strings than round core strings. 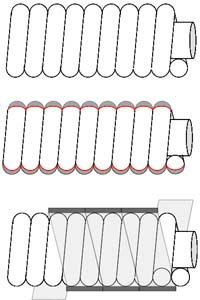 String profiles. From top to bottom, roundwound, half-round or polished (the dark grey shows how the profile has been reduced from roundwound strings), and flatwound or ribbon-wound.

Wrappings on strings tend to be round wire, which makes the surface of the strings kinda "bumpy" and prone to those familiar squeaking and scratching sounds when you move your hands along them. These roundwound strings are a comparatively recent historical development (pioneered on bass by The Who's John Entwistle). While roundwounds sound very bright, the squeaking is sometimes a problem, so string makers have developed so-called "half-round," "polished," or "groundwound" strings which have been had their surfaces levelled off or compressed, or which are around with a flatter wire. They squeak less, but aren't as bright as roundwounds. Flatwound strings are wound with a smooth ribbon—sometimes over a round winding—and play very smoothly, but offer a comparatively flat, dark sound.

In recent years companies (pioneered by Gore, the company which makes waterproof outdoor gear) have been producing roundwound strings coated with special polymers to reduce squeaking. The strings are supposed to be bright, quiet, and long-lasting: some people swear by them, some swear at them. I'm personally indifferent to their sound, but find the polymer coating tends to come off the strings in small, fuzzy bits and makes a mess. Not really into messy strings.

You may have noticed I've been describing the wire used to make strings as "steel." In fact, a number of different stainless steel alloys are used in electric guitar strings, and other types of strings use a metals and materials other than steel.

But they often don't just contain steel. Lots of electric guitar and bass strings have steel cores (for the magnetic properties) but use nickel or nickel-plated wrappings. (And some "vintage" strings are all-nickel.) Nickel plated or all-nickel strings are often perceived to be "warmer" than all-steel strings, which are often described as "crisp" or "bright." Nickel is also softer, and some players find it doesn't tear up their hands as much as steel. Nickel-wound strings certainly don't tear up fingerboards the way roundwound steel strings can! However, nickel strings corrode and break down much more quickly than steel. Flatwound strings use chrome windings, and produce a darker, flatter sound; you'll often hear them in jazz.

So, when it comes to bass, here are my things:

So I need stainless steel, round core, high-gauge, taper-wound strings for five-string electric bass. And you know what? They're hard to find.

I've been trying Ken Smith taper wound mediums and DR "Long Necks" taper core strings, and while the quality and craftsmanship of both strings is excellent…I'm finding they just aren't hurky enough. They feel kinda loose and light, not enough tension. Even with the .130-inch low string. And the growl…! The growl is present on some of the middle strings, but not on the two lowest strings, where I use (and miss it!) the most.

And at $20-$35 per set, it's not inexpensive to experiment with new strings. Guitarists have it easy, in some ways.