One of the odd facts about the U.S. Pacific Northwest is that some parts of it think they're in the European Atlantic Northwest. At least, that's the simplest explanation I can come up with for the region's tendency to grow vast swathes of signature decorative foliage most common to France and the Netherlands.

(Well, OK. There might be some climatic similarities too.)

Out on the Olympic Peninsula, the town of Sequim (pronounced "skwim") holds an annual Lavender Festival, which combines a street fair with tours of several local lavender farms. Come mid-summer, locals and tourists alike are invited to walk rows of many varieties of lavender, buy knickknacks, go in for wine tastings, and generally make a swell time of it. If you're from Provence, the scent in the air may remind you of home; if you're allergic to bees, all the carryings-one may fill you with a deep sense of dread. It is a good excuse to spend some time toodling around the Peninsula, and hopefully not spend hours waiting for a ferry or get stuck on the wrong side of the Hood Canal Bridge. 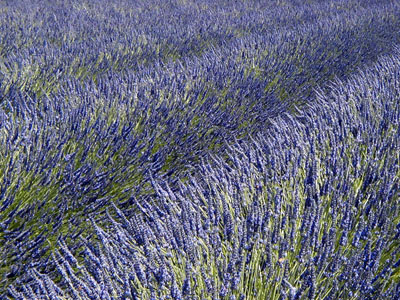 Rows of lavender near Sequim, Washington

Better known, perhaps, is the annual Skagit Valley Tulip Festival, which comes around every April and loosely centered around Mount Vernon, Washington, maybe 60 miles north of Seattle. Where Sequim's lavender fills the air with an unmistakable scent, the Skagit's tulips (and daffodils, irises, hyacinths, and other bulbs) literally paint hundreds and thousands of acres with insanely bright colors. Hundreds of thousands of people travel from all over the world to see the tulips—busses and driving tours are regular, but if you really want to get fancy, a helicopter tour is probably the way to go. The Netherlands is world-famous for its tulips. The flowers were transported to the country in the late 15th century from Turkey, and were greeted with enthusiasm (and high prices!) by the country's elite. But guess what? The tulips caught a virus—mosaic—which didn't kill the plants but caused a spectacular variety of colorful "flames" to appear on the petals. By the 1630s unique varieties of the already-pricey tulips were in high demand, and speculators began investing in bulbs—essentially tulip futures. Prices escalated so fast people were soon selling their land and liquidating all their assets to buy bulbs, thinking they'd strike it rich by unloading flowers or bulbs on ulip-benighted foreigners. As prices soared, some investors decided to strike it rich and the bubble burst, triggering a major economic depression. The events are still studied in economics and investment classes—and, more recently, used as an example of what an overheated U.S. real estate—or dot-com—market might bring on. 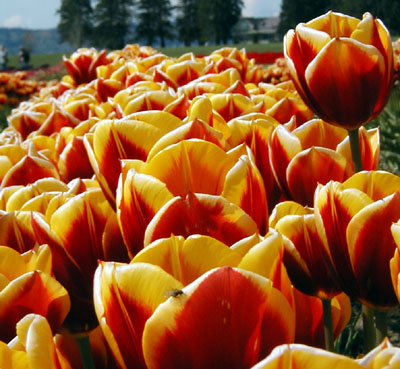 One gold tulip stands head and shoulers above the others

I've never been a tremendous fan of flowers, but even I must admit the sheer variety and exuberance of the Skagit tulips is astonishing. Colors range from pure white to a purple so dark it's almost black; petals can be pointed, wavy, elegantly curved or sport an almost rococo fringe. Some tulips are tiny, some tulips are huge, and, of course, many varieties are flamed.

And the tulip farmers are all about presentation, planting long rows of uniform colors, giving their fields a striped, crazy-quilt appearance. The tulips themselves are harvested and sold, shipping out in great bulk to florists. And, of course, bulbs are also available: once the season's bloom ends, the tulip farmers pull the bulbs: some are saved for next year, while many are saved, sold, and shipped to flower fans in September and October, in time to be planted for next spring.

But for all the uniform rows of tulips…some of my favorites were the rebels who just couldn't bear to toe the line. 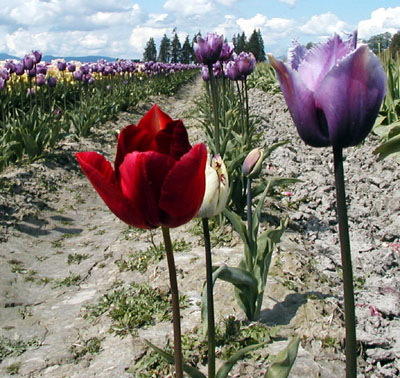 You can almost hear this tulip shout "I will not be purple!"
Related Entries
Copyright © 2022 Geoff Duncan, all rights reserved.
Hey, what's life without fine print?