And The Walls Come Tumblin' Down

The big news around here lately has been the replacement of a retaining wall along the west side of the house.

The lot here is on a slope which runs loosely downhill, with the southwest corner being the lowest point on the property, and the northeast corner—up a driveway leading away from the street—the highest. The total change in elevation over the lot is about six feet: not enough to justify massive earthworks, but enough to require attention to landscaping and drainage. The narrow "front" of the lot faces a street on the south; it's steep enough to pose a hazard when Seattle gets a rare bout of snow and ice. 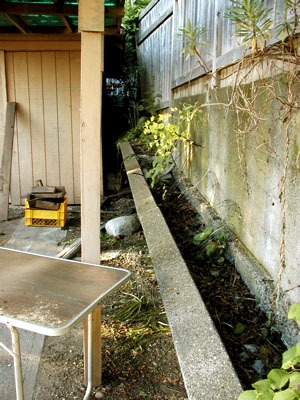 The original retaining wall, viewed from the neighbors' carport: there shouldn't be a foot-wide gap between the wall and The Slab above it.

So: the topography means that one long retaining wall runs along the west side of the lot, ranging from maybe two feet high near the street to almost four feet high at the back end of the property. This wall was built in 1920 or 1921, shortly before the house itself went up, but at some point many years ago it cracked near the middle and the taller, rear-most portion began to lean over. It has been tipping forever: a neighbor says he remembers it was leaning when he and his brother trick-or-treated as kids—and he's in his 60's now. So the tipping pre-dates the earthquakes Seattle experienced in 1965 and 2001.

But tearing out the wall and replacing it wouldn't be easy—which probably explains why no one had done it. For one thing, way back when the wall was upright, the downhill neighbors had built a garage not two feet way from the wall; a more-recent (and lovely) carport extends out from that, for a total of nearly 40 feet of construction paralleling the wall, complicating access and making any work tricky. Furthermore, someone had poured a concrete patio—now dubbed The Slab—on the uphill side of the wall, extending right out to the property line. Although they're separate structures, the combined height of the retaining wall and The Slab reaches almost six feet. The weight of the patio was surely helping tip over the retaining wall, and any new wall would have to bear some of The Slab's weight. 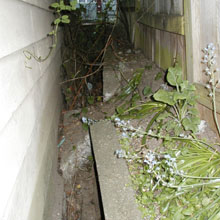 When the renters next door moved out last spring, everyone noticed the the upper lip of the leaning portion of the retaining wall had begun to crumble back alongside the neighbors' garage. Something needed to be done before the whole wall crumbled and, undoubtedly, damaged the wall of the garage. The process of finding contractors was long and complicated; location and access mean this job is nothing but difficult, heavy work, and Seattle managed to experience a lengthy concrete strike, which realistically meant work couldn't start until early autumn: there's not much sense in tearing down a retaining wall then waiting months to put up a new one.

Dig it: a trench takes shape for a new retaining wall.

But demolition finally got started, with sledgehammers, picks, poles, shovels, and lots of rubble. Trees were pruned, vines ripped up, trellises decapitated, fences removed, roots cut, squirrels inconvenienced, and earth flung uphill as, piece by piece, the retaining wall was torn apart using little more than muscle and, where feasible, an electrically-powered jackhammer.

Back in the 1920s, they apparently didn't need no stinking building codes when putting in a retaining wall, so it proved to be a unique creation. For one thing, the wall had no footing: it was just a vertical slab with no reinforcement whatsoever to its base: remarkable that it stayed upright as long as it did. Also, instead of re-bar, we found all manner of interesting items embedded in the concrete as reinforcement, including:

One lesson from de-constructing the wall: early twentieth-century barrel hoops were apparently made from far sterner stuff than one might expect.

But the treasures above almost pale in comparison to the material found buried alongside the neighbors' garage—all of which had to be dug up to lay forms for the foot of the new wall. Items found there included:

Anything containing iron or steel was rusted and corroded almost beyond recognition: after all, this is Seattle, and there's a fair bit ambient moisture in the environment. We were never able to determine whether the pistols were toys or actual weapons: I maintain they were toys, given their small size and the fact we found roller skates and a bike pump in the same area. But they do have characteristics of real-life guns, including safety mechanisms. 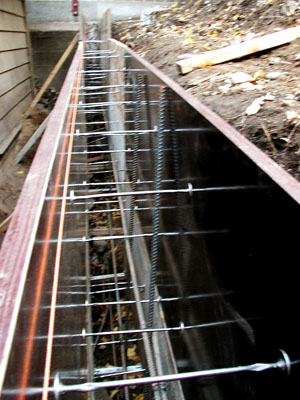 Form for the new retaining wall, alongside the garage where the crumbling wall used to be.

Once the old retaining wall was demolished, progress slowed. Rain repeatedly delayed construction of forms for the new wall, and each shower raised new concerns about how the unsupported (and surprisingly loose) earth would hold up in the event of a good soaking or serious downpour. Fortunately, we had no problems: like the old retaining wall, the earth didn't seem to be in a hurry to get anywhere.

Another complication was concrete: we figured we'd need at least nine yards to form up the new wall, and even though Seattle's concrete strike had been resolved, it wasn't easy to arrange for delivery of significant amounts of concrete. Most concrete haulers and pumpers were working 70 and 80 hour weeks to catch up with backlogged construction projects—including area highways, bridges, and other public works—before Seattle's infamously wet autumn and winter arrived. But we were finally able to get a definite date and get the forms built for the new wall.

When the pumper truck finally arrived, though, we knew we were in for trouble: it was the wrong size! Instead of sending a small pump truck with hose which we could maneuver from the street along the length of the property line, instead we got a medium-sized pumper truck with one of those enormous-insect-proboscis overhead booms! The way the trees, overhead wires, and topography worked out, there was no way that truck could sit along the front or side of the house, extend its outriggers, and somehow get its boom to the retaining wall. Wheelbarrows and shovels were out of the question: there was just too much concrete to pour.

However, the ingenuity of the pump truck operator saved the day. He was able to sight a clear path over the yard of not only the next-door neighbor (with the threatened garage) but the yard of the next neighbor downhill as well, who very kindly let us nudge the nose of the pumper truck into his driveway. So, from a side street and over the tops of two houses, a garage, and a carport—without discounting the delicate balancing act of extending the boom through overhead power and telephone lines and by a large cedar—the pump operator was able to deliver concrete right into the top of our forms. 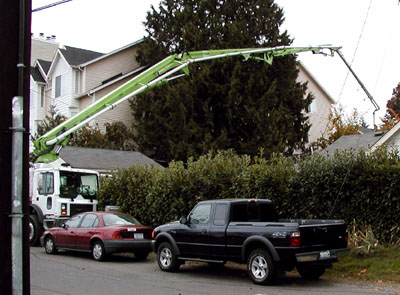 Those pumper truck booms have a long reach!

Then we ran out of concrete. We figured we'd need nine yards; the pumper truck brought ten. Turned out we needed twelve yards and had to wait for a second concrete hauler. For several hours, my street was like a full-sized Tonka playground come to life. Giant trucks! Big equipment! Orange cones blocking the street! Gettin' stuff done!