Take a Bite Out of Crime

One of the things about living in a "transitional" neighborhood is that sometimes you get to watch it transform right before your eyes. Earlier this year, work got underway on Piper Village, a developer-term for a new mixed-used commercial and residential complex being built right on top of a giant sinking peat bog right next to neighborhoods main commercial drag. What they're thinking, I don't know, but in 30 or 40 years, I'm sure they'll be rethinking. Putting up Piper Village meant tearing down a handful of condemned houses dating from the 1920s or so that were slowly being consumed by peat and blackberry. The problem, of course, is that when you tear down condemned houses, the squatters all move somewhere else.

In this case, some of the squatters wound up in another condemned house not far from here. And, not surprisingly, the amount of vandalism and property crime went up immediately. Last summer we were treated to several go-arounds of a graffiti tagging battle (the taggers, which normally eschew vehicles, even hit the brown station wagon, since it never moved anywhere. One neighbor's house was broken into three times (one of the perpetrators was caught coming back for a fourth helping), most of the townhomes in the neighborhood have been repeatedly cased, windows have been broken out of numerous vehicles, and one night there was a tossed suitcase left in our garage—my guess, stolen, rifled for anything of value, then abandoned. 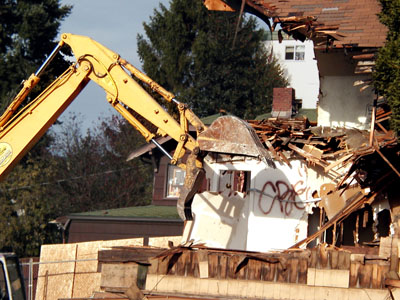 Well, once again, the neighborhood is transitioning: demolition work is well underway on the current squatters' paradise, with backhoes and heavy equipment literally taking bites out of the house, coarsely separateing materials into wood, metal, and other, and bringing it down piece by piece.

Not sorry to see it go, but I wonder where the squatters will wind up now.