Behold that which strikes fear in the heart of Seattle commuters: 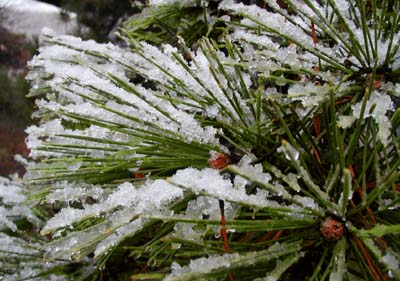 Despite an abortive snow alert last weekend, we now appear to be getting a bit of the real deal: big, wet, fluffy flakes began falling locally at about 11 AM and haven't let up for several hours. The ambient temperature is still a hair above freezing, but slush is starting to accumulate on roofs, sidewalks, streets, and (of course) trees. The white stuff isn't really expected to stick around, but since the temperature's been dropping all day and the evening commute is about to commence, I've made sure no cars I care about are parked on the street, which looks like it could quickly become a slip-and-slide.

The first snow forecasts reportedly create a run on tire dealerships as panicking Seattleites rush to get snow tires on their vehicles. Considering the way so many Seattle residents drive in perfectly reasonable weather, "snow days" make me glad that I work from home. Seattle doesn't often get much more snow than would be considered a light dusting elsewhere, but hills, inexperienced drivers, and de rigueur street parking can turn a light skiff into a traffic nightmare.