A quick set of updates:

By The Hairs of His Chinny-Chin-Chin

I'm happy to report Pugsley's chin is on the road to recovery. I'd read about cats developing bad cases of kitty acne, but never thought I'd see it firsthand. Now, I have. Pugsley had the zits worse than I ever did as a teenager, and on a much smaller chin! 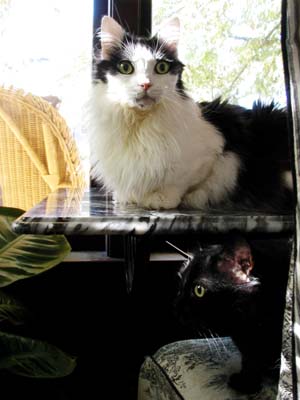 Wednesday (bottom) and Pugsley (top) hanging out at the dining room window.

I still don't know what brought it on: the vets all asked if he ate or drank out of plastic bowls, and I gather some cats can have allergic reactions to plastics which can lead to these sorts of problems. Plastics may also harbor bacteria which can cause infections. But all three kitties have been eating and drinking from regularly-washed ceramic bowls for years.

Pugs' path to recovery has been difficult: he developed little sores at first which I cleaned daily, but then his chin got swollen and he suddenly tore it open by scratching. All manner of blood and puss down his front. I took him to the vet, who shaved his chin (revealing just how extensive the infection was), drained what appeared to be abscesses, and prescribed oral antibiotics and an antibiotic cream. We went through two refills of the first antibiotic, administered twice daily along with cleaning-and-debriding to no apparent effect: Pugs developed new, bleeding sores as fast as old ones started to heal—faster in some cases, as the infected area spread. Another vet visit and Pugs was switched to a stronger antibiotic, a stronger ointment, and a special shampoo. No new areas got infected, but the old ones didn't seem to get any better or worse. The most effective thing really seemed to be regular debriding and cleaning with hydrogen peroxide. Pugs has been remarkably tolerant of all this.

It's been over two months, but the fur on Pugsley's chin is growing back, he's gotten no new infections for over two weeks, and the old ones are almost entirely healed. He'll have some scarring, but I think he'll take that in stride. Makes him look more manly, and Pugs is all about macho. At least when there's glass between him and the other cat.

I just wish I knew what caused his condition. 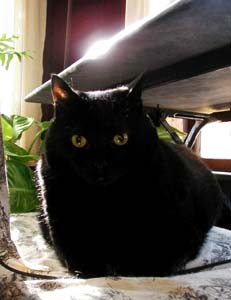 Wednesday takes in the morning sun in the dining room.

Of course, one cat get better, another develops an ailment to fill the void: resident princess Wednesday has developed a limp.

I don't think it's any big deal: she probably just landed badly jumping off the bed or the nightstand, and she's not having any trouble getting to her food or rotating between preferred napping and people-watching spots on the first floor of the house. But she's avoiding having to go up or down the stairs any more than necessary. Although she did come up last night, so I guess she's feeling better. She's not really guarding her leg or paw, and there don't seem to be any especially sore spots that make her complain. Her near-constant complaints seem unchanged!

It's been just over three months—and two updates!—since Apple released Mac OS X 10.4 "Tiger" and I finally got around to installing it last week. Apple touted Tiger as having more than 250 new features, but…you know what? I'm underwhelmed.

In Apple's favor, the installation process went smoothly, and new "migration" technology really did a pretty smart job of moving over my documents, applications, and settings. It missed a few crucial things—like Energy Saver settings—which wreaked weird havoc for a while. And a few things which worked Mac OS X 10.3 no longer work in Tiger: all Nisus Writer Classic documents are treated as text files, so Tiger is even more cavalier about ignoring old-style type and creator codes. (I do much of my writing in an old version of Nisus Writer, and it's still crucial to producing TidBITS.) Also, I used to be able to put my Mac to sleep under Mac OS X 10.3; now, under Tiger, I can put it to sleep and seemingly wake it up, but my displays remain blank, so its impossible to use the computer. It's not that big a deal—I almost never put my Mac to sleep anyway—but it'd be nice to avoid contributing to the ambient heat on hot days if it's not strictly necessary. And, without a power button on the swell keyboard Apple's been producing for the last few years, there's no reliable way to shut down a headless computer using the keyboard.

As for Apple's new much-touted features like Spotlight and Dashboard? I find Spotlight nearly useless, mostly because I already know where pretty much all my files are (I mean, I've been using computers for decades: I'd better know how to manage files!) I'm more disappointed the Finder's built-in search feature is now hideously slow - I mean, I can ask it to search a list of 20 files for one with a name starting with "geoff" and be looking at the only file which meets that criteria, and the Finder's search never returns a result! It just spins and spins and spins. I can't imagine trying to use it to find anything for real.

Dashboard isn't quite the hideousness I thought it might be: although the interface implementation is highly questionable, Dashboard doesn't get in the way as much as I thought it would, and Apple did the right thing in Mac OS X 10.4.2 by adding a way for users to easily add and remove widgets. (Although, frankly, the widget-management thingy would start to break own once 15 or 20 widgets are installed, and Apple ships about a dozen on their own, and it's already overburdened.)

No: mostly my complaints about Dashboard are that the default widgets are kinda lame. The dictionary/thesaurus widget has a limited vocabulary (it fails to find words I know to be legitimate); the calendar is almost useless; the phone book doesn't seem to pull up info for many local businesses; the unit converter is useful but neither it nor the calendar do what I call "date math" (e.g., how many weeks between March 13 and August 20? How many days has it been since September 11, 2001?), which is something I need with regularity. And the flight tracker…sigh. Do you know how rare it is for me to need to track a flight? Well, last week I did need to track a flight and the flight tracker widget would have none of it. "No flights found!" And yet, in the Web browser window behind the widget was a page from the Continental airlines flight status page showing the flight info I wanted. Grr.

I haven't looked at Automator yet, but I sure plan to: I need to do something about that can't-wake-up problem, and Keyboard shortcuts don't seem to be able to choose "Restart" from the Apple menu. I don't see any Restart actions available in Automator, but I'm hoping I can write an AppleScript script to do the job. (I know they deprecated the "restart" Apple even which the Finder used to handle: I'm hoping the new app System Events handles it somehow.) I need to be able to bind a Restart script to some obscure keystroke, and I hope that doesn't require some nasty third-party utility.

But as for the rest of Tiger…I was hoping Core Audio would deliver better performance than Mac OS X 10.3, and so far that doesn't seem to be the case. Some specific bugs have been fixed, but I still can't use Mac OS X to do work I can do reliably (and without straining the system in the slightest) using Apple's long-abandoned Mac OS 9.