This week, it seems todo el mundo is pulling out their collective hair over the "global financial crisis," which has seen banks (like the location Washington Mutual go down in shambles, along with firms like Wachovia and Lehman Brothers. Even the gigantic AIG has been bailed out by the federal government…and seems to be burning through that money so fast it will probably have to come back for more on short order.

The message the current administration seems to be sending is "don't worry, it'll all work out." In the meantime, local grocers seem to be getting in on the end-cap irony. Know someone with a birthday coming up? Perhaps a six pack—or a whole rack—of beer is just what they need. Gift wrapped. 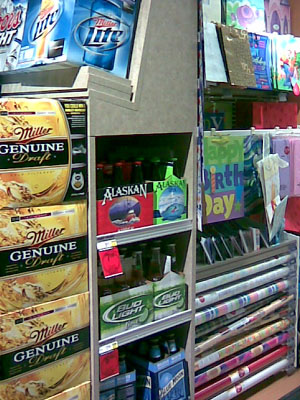 Despite the record-setting losses on Wall Street, folks I've spoken with ask why there doesn't seem to have been a tremendous impact on main street. A colleague wondered today why more people who've seen their financial lives swirl away in the last few days haven't been jumping out of windows and picking other cheery ways to off themselves, a la brokers during the famous market crash in 1929. The simple fact is that folks who've been ruined—or believe they have been ruined—have been slipping off their mortal coils. Most famously so far, an unemployed money manager in California killed his whole family and then himself in a murder suicide—but he wasn't the only murder-suicide prompted by the financial crisis. In Florida a man shot his wife and dog, set fire to his house (which was in foreclosure), and shot himself, and there have been numerous other cases of homeowners, facing foreclosure and eviction, just giving up on their lives.

If this financial meltdown turns into a depression on the scale seen during the Great Depression of the 1930s, let's remember that didn't hit its depths until early 1933. And folks who watch market upswings in the wake of "good" financial news—like Congress authorizing a $700 billion taxpayer-funded safety net for financial institutions—might recall that after the Black Friday stock market crash in 1929, the market rebounded significantly in early 1930.

Both crises have something in common, though: high amounts of consumer and commercial debt. Consumers were using cheap and easily available credit to buy houses and goods; businesses were using it to increase their production. This reliance on credit led to short-term gains, but when prices began to fall, businesses faced defaulting on their credit. Many failed, while other scaled back their spending in an effort to stay in the black. Both developments reduced production and led to layoffs…which reduced demand for new products, making it that much harder to stay in business. So businesses cut prices to lure remaining consumers, sparking deflation.

Bottom line: regardless of what happens in the next few weeks, we aren't likely to see the full impact of these financial events for quite a while.