For a while when I was very young—probably three years old—my father used to grab the evening paper before dinner, sit down with me, and we'd cut out cars. It worked like this: he'd open the paper to the black-and-white ads for local car dealerships, then choose a picture of particular car. If I couldn't tell him what kind it was—Dodge Charger, Plymouth Duster—he'd give me the details and move on to another one. If I got the car right, my father would cut the picture out of the paper and put it in small, hideously pink cardboard box, which he kept high up on a bookshelf. Those were "my cars," and I was expected to be able to identify them if my father ever pulled those clipped pictures back out of the box. Sometimes, when we had company over for dinner, he's bring down the box and have me identify the cars in front of everybody.

When I got to kindergarten, I realized cutting out cars wasn't about being able to tell a Dodge from a Chevy by looking at it (although, once I learned the emblems, that's exactly what I did). It was about teaching me to read, the same way my parents had me shout out words on boxcars when we were waiting on Keystone Avenue for a train to pass, or read road signs ("Harold's Club or Bust!" "Gold Bar!" "Harrah's!" "Holiday Inn!") when driving over the Sierras. I was recognizing the shapes of words more than I was reading, but it gave me a big head start in school.

(Although, as a youngster reading highway signs, I was briefly convinced I was growing up in a town called "Keno.")

So here's the thing: my father didn't cut cars out of the paper using scissors. Instead, he used the small blade on a little pocket knife he carried with him everywhere. He called that knife the "owl cutter." To me it seemed immeasurably ancient: its handle had the pitted surface of stag horn, but may have been made from Delrin resin for all I know. It had just two blades, one only about ¾-inch and the other maybe an inch and a half, they were both plain steel, rather than the stainless in most knives today.

As I remember, my father used that tiny knife for everything. Fix the bike pump? Check. Fix the bike? Check. Remove a splinter? Check. Ream out his pipe? Check. Fix the screen door? Check. Reconnect battery terminals in the truck? Check. Pick teeth? Check. Pry open a can of paint? Check. That knife seemed like magic to me, and my father definitely knew how to use it. It didn't have a screwdriver, but the back edge of both blades could be used to loosen or drive screws—and the angle of the tip of the small blade even meant he could even use it to adjust his glasses. We could be out in the desert with the pickup hung up on a rock, spend a half an hour shoveling and trying to set a jack to tip the truck up or down the road, and in the end it would be the owl cutter saving the day—in that case, being used as a tiny but indestructible wedge jammed under the brake pedal to keep the truck from rolling off on its own once we tipped it loose.

When I was 10 or so my father gave me my own pocket knife, a larger thing with a mother-of-toilet-seat handle, a couple stainless steel blades, and (I think) a screwdriver/bottle opener combo tool. I dutifully carried it with me, but I never seemed to be able to discover the owl cutter magic within it. When I tried to use the screwdriver, it would be too big, or (worse) fold up on me when I applied pressure. The knife wouldn't hold an edge very long, and the thing was a large, awkward lump in my pocket, always jamming into my leg. Eventually, teachers expressed a little displeasure that I was carrying a 2-inch knife to school—times were simpler then—and it got put in a night stand drawer and mostly forgotten.

In college, I happened to be in the local hardware store and there, slouched behind a display of mini WD-40 cans, was the tiniest Swiss Army Knife I'd ever seen. Kids my age had certainly seen their share of Swiss Army knives, but they were pretty much exclusively the reserve of Boy Scouts and camping, and notable mainly for the sheer variety of implements that could be released from their gargantuan casings. Once, marveling at the scissors and the toothpick, me and some friends were examining one and couldn't name some of the protuberances that popped out. Swiss Army knives had a bunch of pokey things and even a saw, but, dammit, that saw wasn't going to help much with firewood, and it was sure awkward to carry.

In my life up to that point, I don't think I'd ever seen a Swiss Army knife for sale. I think I imagined they were contraband, something maybe only Army vets have, like ammunition boxes or old gas masks. But there was this lone, tiny Swiss Army knife in the hardware store. Tiny, slim, one blade, a file with a standard screwdriver tip, and a tiny pair of scissors. (Oh, and a slide-out toothpick and pair of twwezers!) I bought it on the spot and, later that night, had to explain to band mates that I couldn't chip in anything for pizza. I didn't eat, and I didn't care.

Immediately, the owl cutter magic appeared. Pop a broken doorknob? Check. Strip electrical wire? Check. Cut matte board? Check. Pull splinters? Check. Crack open a computer case? Check. Emergency fingernail repair in the middle of a gig? Check. Loosen that impossible knot? Check. Replace guitar tuners? Check. Trim split ends? Check check check. I immediately lost the toothpick—which meant there was a small hole in the knife's casing that accumulated an astonishing amount of lint—but I wasn't concerned. The little spring that pops the scissors open quickly fatigued and broke off, and I was actually pleased—that little spring had been possibly the only annoying thing about the knife! I didn't even care that it didn't have a bottle opener—because the entire thing was a bottle opener! Pop out the scissors, get the edge of the casing under the bottlecap, give a quick twist—huzzah! Bottle opened.

Then, somewhere in Massachusetts, I used it to fix an eyelet in one of my shoes. And when I next reached for my knife, it was gone.

No problem, I thought. Back to the hardware store as soon as I returned to Ohio! But there were no knives hiding behind the WD-40. I asked the proprietor if they had any tiny Swiss Army knives.

Imagine one of those long, anguished cries from the movies—Nooooooooooooo!—with lots of reverb and then a wash of dramatic strings, with the camera pulling out as I stumble out of the hardware store into the dark city street, staggering between swerving cars, spirit broken, not even bothering to put on my coat against the torrential rain.

OK, fine. It was a sunny, late spring afternoon in a small town and I didn't have any trouble staying on the sidewalk. But, still. Devastated. 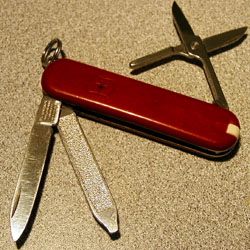 I didn't see the tiny Swiss Army knives again for a couple years, and grudgingly carried a gigantic multi-tool on occasion. But, one damp, overcast day—living in Seattle now—I walked into a small hardware store and there they were, on an endcap with a bunch of flashlights. My tiny Swiss Army knives! I immediately bought two, reasoning that if I lost one, at least I'd have a backup.

And, of course, having a backup means, 15 years later, I'm still using the first of the two knives I bought that day. The other is still in its blister pack, stashed in my sock drawer. Victorinox has reinvented itself and expanded both its product lines and distribution channels, meaning the knives are much more widely available now—I see them fairly regularly. My particular model is now called the Classic SD, and it looks like they make a similar one called Signature with a retractable pen rather than a toothpick…and it sounds intriguing until I realize it sounds like a great way to get a pocketful of ink.

But what a knife this has been! I've used it to fix my car, prepare meals, remove thorns, repair light fixtures, maintain instruments, whittle wood and plastic, fix the washing machine, debride wounds, mark a trail, field strip a notebook computer, wire up audio and music gear, and innumerable other things. I'm not exaggerating that I probably use that knife for something every day, even if it's just helping open up one of those annoying square cartons of soy milk with those idiotic plastic pop-top things that never work. My knife is showing its age—the Victorinox insignia fell off recently, the blade is scratched up, it's got dents where a farm dog decided to use it as a chew toy—but the blade still holds a fine edge, and I use it all the time.

And, yes, I still have the tweezers and the toothpick. But the spring that opens up the scissors broke off many, many years ago.

And, no: I have never known why my father called his tiny utility knife "the owl cutter." I'm just glad I found something half as good.