I'm more than a week late to this party, but hey: in astronomical terms this event is still brand new.

The International Astronomical Union has, after considerable internal debate and an actual vote, adopted a new definition of the word planet excluding Pluto, which has been regarded as our solar system's most-distant member for more than three-quarters of a century.

Like many people from Tom Brokaw's so-called "Greatest Generation" onward, I've always held a soft spot for Pluto. It's spunky—there's no better word for it. Pluto's a little guy out there on the farthest edge of nothing, competing for attention with four gas giants (Jupiter, Saturn, Uranus, and Neptune— each with their own impressive private orreries of natural satellites). Pluto needs 248 years to go around the sun and always takes the prize for being the most mysterious place in the solar system. Its orbit is unlike any other planet, all tilted funny and actually moving it closer to the sun than Neptune every so often. Plus, in an undeniable display of machismo, we eventually find Pluto has a gigantic moon Charon, then tiny tagalong moons Nix and Hydra—and now scientists are looking for more moons and maybe a ring system.You've gotta give the wee lad some credit!

But only now we're seeing the real depth of Pluto's long-term strategic thinking. With the IAU vote, Pluto has accomplished a feat unlikely to be repeated by any planet in our solar system:

Pluto has made every textbook on Earth discussing astronomy wrong.

There used to be nine planets. Now there are eight. It's brilliant, I tell you: brilliant. And it only endears Pluto to me more.

See, as a child, one of many (many!) frustrating things about school was being told that the textbooks were right. If I disagreed, my grades would suffer. It's true that textbooks are accurate more often than not, and their shortcomings tended to be omissions rather than blatant untruths. But when I had to answer that no one had ever served as the governor of more than one state (not true! Sam Houston: Tennessee and Texas), that Japanese Americans were interred during World War II because they were a threat to national security (not true! hysterical racism, pure and simple) or that the United States has won the Viet Nam war (yeah, sure)…I would get annoyed. When I had to answer on exams in Washoe County public schools that that my home state of Nevada was admitted to the Union in 1863 (no, 1864—on Halloween, no less!) so gold and silver mining could pay for the Civil War (no: that's part of why Nevada became a Federal territory, but statehood had to do with getting Lincoln re-elected), I would become downright petulant.

(I still am, apparently.)

Pluto may no longer be considered an official planet, but for the next year or two, it will be providing an enormous benefit to school-age children: a glowing, high-profile example that textbooks are not always right. Huzzah. 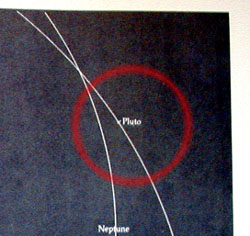 Hey, this textbook has the planets wrong!
Who's laughing now, Mrs. Valine?!

Pluto has always been a wonderfully odd duck in the solar system. Seven planets (and one moon) are visible to the naked eye: Mercury, Venus, Earth (look down), Mars, Jupiter, and Saturn. (The one moon? Look up.) According to those pesky physical laws promulgated by folks like Newton and applied by Titius and Bode, there are certain spots in the solar system where planets "ought" to be, and astronomers started looking in the gaps where planets hadn't yet been discovered. Uranus was spotted by astronomers with telescopes as far back as 1690 but mistaken (and cataloged) as a star. In 1781 William Herschel spotted Uranus using a telescope he's built himself to conduct a sky survey; years later, he noticed it was moving in relation to the rest of the sky. Therefore, the object was a planet, not a star—and, by George, right where Bode's Law said it should be! In a fit of fealty Herschel declared the planet's name to be "Georgium Sidus" after George III of England. Other astronomers accepted Herschel's findings but just called the planet "Herschel" until 1850, when everyone decided to stick with the Roman God theme and call it Uranus.

But Uranus was a funny bugger: it wasn't quite where it ought to be. Fiddling with the math, by 1843 astronomers Jean Le Verrier and John Couch independently figured there had to be another, as-yet-unseen planet whose gravity was pulling Uranus out of whack. Sure enough, in 1846 German astronomer Johann Galle found Neptune, making it the only planet in the solar system to be discovered because of mathematical theory rather than observation.

But again, Neptune wasn't quite where it should have been, leading scientists to suspect there was yet another planet whose gravity was influencing Neptune's orbit. But, math or no math pointing to specific regions of the sky, no one could turn up this mysterious predicted planet. The outer reaches of the solar system are pretty dim, and the thought was that telescopes just didn't have enough power to resolve objects which might be drifting out there. Numbers may not lie, but theories can be wrong, and astronomers at the time weren't in the habit of declaring the existence of planets until they actually set eyes on them. (Nowadays, we think we see a star give a little wobble, we declare it a solar system and break out the Tang and Cristal. How times change!)

Eventually, American astronomer Percival Lowell—who's also responsible for our treasured cultural myths of little green men and Martian canals, along with the discovery of more than 500 asteroids and probably 700 stars—caught the bug, becoming somewhat obsessed in his later life with discovering what he called "Planet X." Beginning in 1905, he applied the resources of his private observatory in Flagstaff to the search for another planet beyond Neptune, but Lowell never (knowingly) found Planet X. When he died in 1916—after having published the results of his fruitless search in 1915—the hunt for Planet X stopped altogether until 1927, at which point the determined folks at Lowell Observatory went back at it, hiring an aspiring astronomer named Clyde Tombaugh to help out in 1929.

In late 1929, by chance Tombaugh stumbled across Pluto using a "blink comparator," a device with a distinctly Golden Age of Sci-Fi name which essentially flips between two registered photographs of the same fraction of the sky. As you flip, fixed stars don't appear to shift when you switch between the photos, but anything else will appear to jump. In two photos, a very dim dot jumped; Tombaugh then found a third photo which completed his official flipbook of Pluto's discovery.

Thing was, Pluto wasn't where Lowell (and contemporary William Henry Pickering) thought Planet X ought to be, and nor did it appear to have enough mass to account for Uranus's and Neptune's unexplained orbital anomalies. Pluto was indeed an undiscovered body beyond Neptune's orbit, but it wasn't Planet X.

Once again, we see Pluto's mischievous side—and did you catch that word "knowingly," above? One of history's little ironies is that Lowell's search for Planet X did catch two images of Pluto during 1915, but no one realized it until 1930. So you see, even back then Pluto was a cantankerous little runt.

Tombaugh spent much of his career hunting for Planet X, carrying out an exhaustive survey of the sky around the ecliptic (a plane in space in which the orbits of the planets lie—although Pluto's is akilter). He discovered asteroids, but ruled out the existence of a planet the size of Neptune within 100 AU (about 930 million miles) of the sun; in comparison, Pluto's orbit varies between roughly 30 and 50 AU from the sun. Oh, another of Pluto's little sniggering tricks: remember those calculations which found anomalies in the orbits of Uranus and Neptune attributed to Planet X? Those anomalies disappear when modern, more accurate values for the masses of Uranus and Neptune are used.

So now, we must officially consider Pluto a "dwarf planet," which the IAU defines thusly:

A "dwarf planet" is a celestial body that

Pluto winds up as a dwarf planet on the third point above (failing to clear its neighborhood), since it hangs out with a bunch of Kuiper Belt homies like the plutinos. Pluto now joins ranks of defrocked planets alongside Ceres, the largest (and first discovered) of the asteroids in the region between Mars and Jupiter. Ceres was initially discovered by accident by Giuseppe Piazzi in 1801, and—since it lands in a magical planetary slot predicted by Bode's Law, above—was initially considered the mysterious missing planet between Mars and Jupiter. (No, I have no idea if school children of the day had mnemonics like "Many Very Energetic Monkeys Continued Jumping Sideways Uphill" to memorize the eight planets of the day.) Eventually, astronomers found a few more big asteroids in the same region—Pallas, Juno, and Vesta—and declared Ceres an asteroid rather than a planet. Ceres may be eligible for dwarf planet status nowadays, although I don't think the matter has been taken up by the IAU.

There's also bizarro-boy Chiron—might be a comet, might be a Centaur asteroid, might be a dwarf planet now, no one knows—which was discovered in 1977 flying a chaotic path between Saturn and Uranus. But—aside from big asteroids between Mars and Jupiter, if they turn out to be roundish—the rest of the dwarf planet candidates seem to be out beyond Neptune, many of which may lose their cute designations as plutinos and cubewanos.

One certain dwarf planet is 2003 UB313, informally dubbed Xena by its discoverer Michael Brown. (Yes, that Xena—it's a nice reference to Planet X—it even has a moon, informally named Gabrielle.) (No, not that Michael Brown.) Xena is bigger than Pluto, which is kinda what brought the IAU to finally get around to trying to define the term "planet." Brown also discovered Sedna, which itself may turn out to be a dwarf planet. Sedna and Xena are far enough away from the sun that they may be inner members of the Oort Cloud, a hypothesized collection of icy lumps and material which could extend light years away from the sun. Sedna is about 8 billion miles from the sun; Xena can be as far as 10 billion miles away—almost ten times further out than Tombaugh's search radius for a Neptune-sized Planet X.

So, the outer solar system is looking as confusing and complex as the inner solar system—the more closely you look at things, the more complicated they get. But, despite my long-established fondness for His Chinness and his associations with things Xena, for my money none of these new dwarf planets seem to have half the moxie of Pluto. No drama, no trickery, no thumbing their nose at the big guys. So far, they're just out there on their own, ignoring the rest of us, freezing their rocks off.

Or…maybe that's just what Pluto wants us to think.