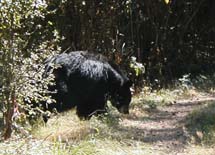 Meet Hank. At least I think he said his name is Hank. Hank's a black bear who's bigger than your average breadbox. He likes to stroll by and check out an apple tree at the edge of a meadow in a nearby park. I tend to read at a bench under that same apple tree. Over four or five encounters this summer, Hank and I have reached an understanding: one of us hears the other, we make a bit of noise to get the other's attention, then wait until the other wanders off a bit. He doesn't feed me, and I don't feed him. Bears might be noble critters of the forest, but they ain't subtle when they mosey through the brush - unless, of course, you're too busy blasting tunes into your ears to hear them coming.

Of course, Hank doesn't restrict himself to meandering through the underbrush: he has no problem wandering right down the middle of a horse trail on a weekend... and he's considerably more polite than some of the off-leash dogs.